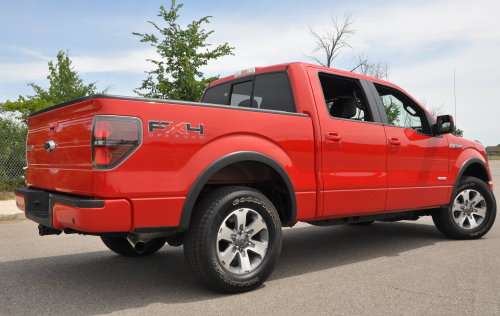 It’s up and it’s good, as the AAA Auto Buying experts kicked another field goal by releasing their list of tailgating vehicle options for trucks, including hybrids and crossovers for the 2012 football season, but the traditional truck winners went to Ford F150 and Chevrolet Avalanche.
Advertisement

In case you hadn’t noticed, the 2012 football season begins with college football this week and the NFL regular season thereafter. For many Americans, that means it's time to load up their car or truck for tailgating prior to the game, and the AAA Auto Buying experts are here to help by kicking off football season by releasing their list of top vehicle picks for tailgating. This year the Ford F150 and the Chevrolet Avalanche made the top of the traditional list.

According top the press release, tailgating vehicles are traditionally thought of as trucks and SUVs. For those football fans seeking a more traditional vehicle, AAA Auto Buying experts have three top picks from the top of the Big-3:

Ford F-150 EcoBoost: For fans who like their tailgating vehicles to actually have a tailgate, AAA Auto Buying experts suggest the Ford F-150 EcoBoost. It's a pickup truck with V-8 power and six-cylinder fuel economy. The extended and crew cabs make it easy to carry friends and family to the game in surprising comfort while the cargo box easily accommodates everything necessary for a great tailgating experience. The TrueCar national average selling price of the 2011 Ford F-150 SuperCab XLT is $32,245, 6.8 percent less than the MSRP.

Chevrolet Tahoe Hybrid: This choice is ideal for the fans seeking a slightly 'greener' vehicle for tailgating that still provides them with all the room they need for a good tailgating party. The cavernous interior, for example, provides ample room to carry fans and supplies to the big game. But for those who want a deluxe tailgating experience, the Tahoe's generous towing rating makes it easy to haul a separate trailer filled with the ultimate tailgating supplies. The TrueCar national average selling price for the 2011 Chevrolet Tahoe Hybrid is $46,073, which is 11.6 percent less than the MSRP.

Chevrolet Avalanche: The Chevrolet Avalanche allows fans to enjoy an actual tailgate at their tailgating party while also being able to securely lock away their supplies when they head inside the stadium. The Avalanche has a unique combination of a crew cab pickup truck passenger cabin with a cargo box that can be locked and kept weather-tight. The TrueCar national average selling price for the 2011 Chevrolet Avalanche is $31,780, 14.7 percent less than MSRP

For the record, AAA's top picks also included a list of less traditional vehicles, selected by its AAA Auto Buying experts who test drive and evaluate hundreds of vehicles each year.

Ford Flex: For fans looking for tons of room without getting an SUV, AAA Auto Buying experts suggest the Ford Flex. Its boxy styling delivers an exceptionally roomy interior that is perfect for passengers, coolers, grills and folding furniture. The EcoBoost engine, with its improved performance and better fuel economy (over the standard V-6), makes the Flex even more attractive as a spacious SUV alternative for tailgating. The TrueCar national average selling price of the 2011 Ford Flex with EcoBoost is $34,169, which is 9.8 percent less than the MSRP

Subaru Forester: For diehard fans that tailgate in any weather -- be it rain, sleet or snow -- they want a vehicle like the all-wheel-drive Subaru Forester that can get them through any conditions to the game. In addition to delivering exceptional value, this crossover utility vehicle offers lively engine response (in the turbo version), comfortable seating with room for four and above average ride and handling. In addition, the cargo area should be more than capable of handling the basic necessities for a good tailgating party. The TrueCar national average selling price of the 2011 Subaru Forrester is $20,537, 4.6 percent less than the MSRP.

Nissan Cube: The most untraditional pick by AAA Auto Buying experts for tailgating is the Nissan Cube. Its styling may appeal more to college student or recent graduates, but it still provides amazing amounts of room for party food and tailgating gear. Additionally, the Cube has an exceptional turning radius and swing-out tailgate that will make maneuvering and setup in a crowded parking lot a breeze. The TrueCar national average selling price of the 2011 Nissan Cube is $14,697, which is 5.2 percent less than the MSRP.

"Tailgate parties are synonymous with football season. While some diehard fans will purchase an older vehicle and deck it out with their team colors and features specifically for tailgating, most fans head to the stadium in the vehicles they use every day," said John Nielsen, AAA National Director of Auto Repair, Buying Services and Consumer Information. "If you're an avid tailgater and in the market for a new vehicle, AAA Auto Buying experts have compiled a list of vehicles you should check out before the big game."

As North America's largest motoring and leisure travel organization, AAA provides more than 52 million members with travel, insurance, financial and automotive-related services. Since its founding in 1902, the not-for-profit, fully tax-paying AAA has been a leader and advocate for the safety and security of all travelers. AAA clubs can be visited on the Internet at AAA.com.

-----------------------
About the Reporter: After 39 years in the auto industry as a design engineer, Frank Sherosky now trades stocks, futures and writes articles, books and ebooks like, "Perfecting Corporate Character," "Awaken Your Speculator Mind", and "Millennial World Order" via authorfrank.com. He may be contacted here by email: [email protected] or on Twitter @Authorfranks

Tesla-Funded Research Reveals One of The Biggest Mysteries of EV Battery
Tesla Tesla Buyer Nets a Whopping $12,000 Discount After Asking for Reduction
END_OF_DOCUMENT_TOKEN_TO_BE_REPLACED