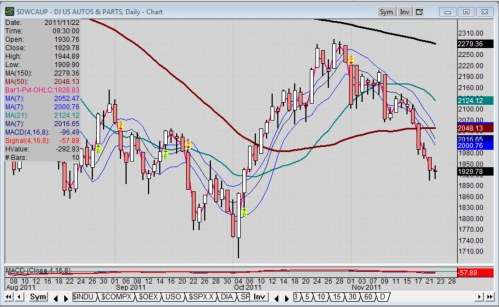 Despite plenty of news about returning sales at the automakers like GM, Ford, Chrysler-Fiat, Toyota, etc., the auto stock sector reflects much pessimism due to the global economy especially for 2012. Question is, what will turn the auto sector stocks around from their bearish bias?
Advertisement

It doesn’t matter who or what you read, the news on the global economy is surely pressuring the auto stock sector. Look at any auto stock chart and the pattern will likely look similar to the $DWCAUP, the only index-like indicator that we have for automotive. It is called Dow Jones US Autos & Parts.

Outside News Not Good

As a trader, I review a lot of stock charts and look for similarities as well as difference. That’s my research niche. I also research many views on what so-called specialists say and write about the economy, which is not my niche; and not very many are positive. Here are a few excerpts that I selected to share:

According to David Moenning of StateoftheMarkets.com, “To be sure, there was little to be positive about yesterday. The charts are toast. The news is abysmal. France is next. The Chinese are worried. Washington is a joke. Germany doesn't want to play nice anymore. The ECB is just saying no. And even Warren Buffett says the Eurozone has issues that might be tough to fix.”

“In short, gone are any and all thoughts of a new bull market (never mind that Ned Davis Research says the chances are high that a cyclical bull has begun). Gone is the optimism that the powers-that-be across the pond will be able to stop rates from continuing to rise. And gone is any hope for the traditional year-end rally. Nope, all anybody could talk about yesterday was the doom and gloom that has become pervasive in this market.”

Elsewhere, Jeff Clark of stansberryresearch.com wrote: “It's a schizophrenic stock market. The trend shifts from bullish to bearish to bullish and then back to bearish – all within just a few days. My personal perspective is changing just as fast. I was buying in October… selling last week… and now I'm buying again.”

But my favorite was from Eric Fry of DailyReckoning.com who wrote: “When the counterfeiters wear pinstriped suits, hold advanced degrees from Ivy League institutions, draw government paychecks and conduct their counterfeiting operations in government-sanctioned facilities like the Philadelphia mint, counterfeiting is not merely legal, it is financially sophisticated...or so we’re told.”

“The process is called “quantitative easing” (QE)...and it is not new news. Almost every investor on the planet has heard of this process by now and understands — more or less — what it is. It is counterfeiting, more or less. The Federal Reserve prints dollars and uses those dollars to buy mortgage-backed securities and/or Treasury bonds. At last count, the Fed owned more than $1.6 trillion worth of Treasuries.”

One look at the $DWCAUP and you see a familiar price-dynamics pattern that reflects the sentiment of what you just read. First, there is a bottom in early October followed by a swing peak in late October. Furthermore, the 50-day moving average (red) is below the 150-day moving average (black). That’s technically bearish.

Every one of these auto stock charts are showing a bearish bias; meaning the risk is in buying, unless you have a very long-term horizon. For the record, GM closed today at 20.73, Ford closed at 10.09 and Toyota closed at 61.94 just above a new 52-week low of 61.

According to the definitive book on value investing, “The Intelligent Investor” by Benjamin Graham, who was the mentoring voice for Warren Buffet in his early years, “stocks become more risky, not less, as their prices rise - and less risky, not more, as their prices fall.”

So, should you be buying auto stocks at these levels? Elsewhere, Graham wrote, “you should welcome a bear market, since it puts stocks back on sale.”

Problem is, not everyone has the chutzpah to buy when stock prices are in a bear market; and I confess that I am one of them. That is why I like options for its potential but defined risk.

Another point is, the $DWCAUP reflects the major automakers within a basket of everything automotive including parts at this time. So, it pays sometimes to view this chart in addition to just OEMs. And key is the fact that all, including part manufacturers, are still saying the same thing right now - downtrend bias.

This will not last forever; it never does; and I think that’s what Graham’s book indicates. In this case, it might pay to at least watch individual automaker charts in light of the $DWCAUP. In other words, watch for any stock breaking away from the general trend, as that would be significant. We want to see a flattening or bottoming of prices.

Of course, most charts are following the general market these days. If the Dow goes up, then auto stocks often go up, too., in unison; just not to the same degree.

Wednesday, Nov. 23rd is the last trading day for this Thanksgiving Day week. Just be apprised that other markets around the globe will be open. So, that means - game is always on somewhere, if nowhere else than in the minds and hearts of traders and investors around the world.

What the market will do next week is anyone’s guess. Some CNBC guests are actually asking if their will be a Santa Claus rally this year. For sure here are certainly plenty of opportunities for black swan events.

Just know that those statements I quoted earlier are real ideas from real people. If they exist in someone’s head, there are likely others; and ideas affect sentiment. Question is, have we reached a level of sentiment whereby there is blood in the streets? Or is there more downside to go?