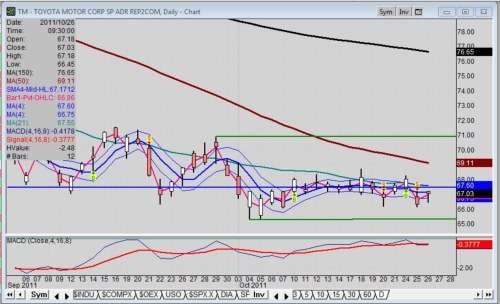 The Toyota brand may have held on to the sixth position in the Consumer Reports JD Power Survey, but Toyota Motors (NYSE: TM) stock is still clinging below its multi-year low, as well as below its 50-day moving average.
Advertisement

Good news, though, for the Japanese automakers as they still rule the Consumer Reports - JD Power survey, and even better for Toyota with its Scion keeping the top spot followed by Lexus, which jumped seven rungs. However, for stock owners, the story is quite different.

Recall that I wrote mid-October that despite news about the 2012 Toyota Camry debut and the plans to diversify location of key part production around the globe, Toyota stock at the time was still trading below its key price resistance area of 67.55 set in September, 2010.

Toyota stock is still trading below that level, at 66.90 as of 2:25 p.m. today. Furthermore, the stock has failed to make any technical jump to higher or lower ground; in other words, Toyota stock is trading inside a channel defined by its own price dynamics.

For the record, according to the general rules of technical analysis, previous support levels become overhead resistance whenever they are breached; and previous resistance levels tend to become support when broken above it. Problem is, anytime a stock does the old break above then break back below only lower means great uncertainty. The bulls and bears are in a major battle as to who will lead.

Now it appears neither the bulls or the bears can decide who is in charge.

Fact remains that most auto stocks have been led mostly by the powers of the general market, which has been pressured heavily by the economic and sovereign debt news of Europe and the BRIC nations. And, according to MarketWatch, the Greece debt story looks like it is about to go from bad to worse for Europe.

Still, it amazes even me that what I wrote a few weeks ago still stands: “Nonetheless, life goes on as it did over the past few weeks, when Toyota stock tested a low set as far back as September 2010 in the 67.56 area. Question is, will that support hold the next time the general market goes south? After all, no auto stock, Toyota included, seems to have the power to go against that magnitude of general market trend should it strike again.”

Realize that I am not a stock guru and never look at myself as one. I do watch price dynamics and simply cannot divine anything much beyond a week to a month, but this one seems to be sticking.

What else is new technically for Toyota stock?

In plain English, nothing much; but that still sends a message to prudent stock traders.

At some point in time, Toyota stock will likely be a great buy. I simply cannot say when. So, perhaps selling some puts and biding time might be a prudent strategy; that is, unless Europe somehow solves the debt dilemma. At that point, TM will likely pop upward.

Then again, America has its own debt dilemma, as do Ford Motor Company (NYSE: F), General Motors Company (NYSE: GM) and Chrysler. Only Toyota seems to have enough cash on hand to weather the latest economic storm.

So, the picture, although burdoned by a lower production expectation for the remainder of 2011, Toyota seems strong enough not to panic; but the price dynamics say the big money may simply be biding their time; unless they are buying TM slowly at these levels, accumulating stock for the next bull run. In either case, a short put or a long overhead call may be in order. For the record, I have no positions in TM right now, but I am scanning.