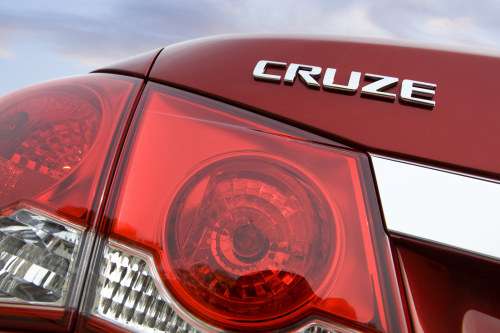 In addition to efficiency of the Cruze Eco, Chevrolet has now confirmed the rumor is true; an even more efficient diesel variant will be offered for the 2013 model year.
Advertisement

According to the General Motors Company (NYSE: GM) news release, the diesel engine will bolster the already fuel-efficient Cruze lineup.

For the record, diesel versions of the Cruze are currently being sold in Europe. So, it is surprising this variant isn’t a mid-year 2012 offering. Perhaps there is an issue over federalization, the task of making the car meet all U.S. EPA and NHTSA requirements.

The Cruze Eco, however, with a standard six-speed manual transmission, is not going away; as it is still considered the most fuel-efficient gas-powered/non-hybrid vehicle in America, with an EPA-rated 42 mpg on the highway. This diesel offering will make the car retain its leading position.

For the record, an article in June by TN’s Gordon Block noted the expectation for the diesel Cruze would be 50 mpg highway. Read: Chevrolet to offer diesel Cruze in the US. This latest news release, though, did not mention any highway mileage. Nor was there any mention of a city rating.

On a business note, the Cruze recorded a total of 24,896 sales in the United States in June, the fifth consecutive month sales have exceeded 20,000. The success of the Cruze has increased Chevrolet’s total share of the compact-car segment from 9.5 percent a year ago to 11.9 percent for the first five months of 2011, even as the segment size grew 19 percent.

This is great news for America and GM. Finally, the company is thinking about fuel efficiency in a meaningful way that will not require extensive government subsidies.

It would be prudent for GM to build the Chevy Cruze line as efficient as possible and as green as possible. Offering the diesel engine is a positive step in that direction. Next should be a natural gas option.

After that, I say GM should bring out their HCCI (Homogeneous Charge Compression Ignition) technology out from the lab, which functions like a diesel but on gasoline.

Better yet, consider introducing a split-cycle engine with an air hybrid feature, and really put a stake into the green ground as the most efficient IC engine offering. And if the GM engineers and marketing people do not want to admit that someone else like Scuderi and Tour just might may have invented a more efficient engine, then they will likely suffer the consequences in the global free market; because other automakers (read foreign) are considering the split cycle for their future offerings as a way to meet 2016 mandates and beyond.

Peter Martin wrote on July 25, 2011 - 7:50am Permalink
A wide well come for the new advanced models of the Chevrolet. waiting for it. <a href="http://www.autohubinc.com/">Cars for sale</a>
ashley wrote on August 3, 2011 - 6:51am Permalink
desparate to see the new advanced Chevrolet diesel car model. waiting for it. <a href="http://www.cardealera.com/">Cars for sale</a>
Anonymous wrote on August 13, 2011 - 10:06pm Permalink
tax payer robbing theives