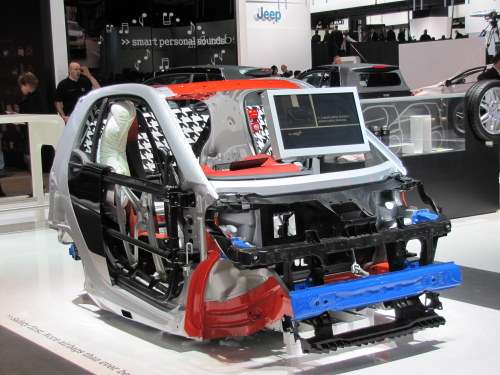 2012 NAIAS rumored display of smaller cars, not what public wants or needs

With press review days a week away, rumors and auto web reports say the 2012 North American International Auto Show in Detroit will have a heavy focus on smaller cars. Question is, will the public be convinced to buy them?
Advertisement

From MarketWatch to Auto News and others, the reports also indicate the 2012 North American International Auto Show will be rife with claims of increased gas mileage, more use of electric motors and rechargeable batteries as trends. Nonetheless, this focus on smaller cars is misguided, in this reporter's opinion; and in the eyes of the public who are being deluged with offers of smaller cars, especially EVs, for more money than the masses can afford.

Fact is, present auto production processes do not lend themselves to building light, large cars. So, this reporter sees this shift to smaller cars, not as something the public wants, but more as a familiar ruse by the automakers to first show capabiity to meet MPG mandates, but also to buy time until they figure out how to revamp their manufacturing processes. Fact is, lighter cars are coming, but they making them smaller to rid th eweight is not progress.

Of course, the steel industry is on the side of automakers, touting the continuity of present processes, and the supposed safety of steel over lighter materials; but the facts say otherwise. Lighter is not necessarily weaker or less safe. Witness the body structure of the Tesla S sedan which meets all safety standards.

So, think smart body design here. Think structural design with lighter materials, even a combination of extruded aluminum welded to aluminum panels for greater structural integrity. Moving to aluminum, magnesium and carbon fiber, however, will require a major shift in manufacturing processes at auto plants. This will be as significant as the change from processing IC engines to electrification with lithium-ion batteries.

Point is, lighter weight is what’s needed and wanted by the public, not smaller cars. Ask any family. It is the few that afford a Chevy Volt; but it is also the few that can live with a small 4-seater as a family vehicle.

Even Lotus has lightweight bodies as future vision. For example, read: Lotus Engineering cues media on future of automobiles with Technical Press Workshop. In fact, Lotus likes to tout the words that “the lightest component is the one that isn’t there.” So, design functionality is key. Thus, the Lotus team more often combines parts so as to attain multi-functions. In some cases, a part can handle 4-5 functions.

On the increasing of gas mileage, lighter weight vehicles directly contribute. Even with IC engine technology, which surely will make significant gains in the coming years, benefits immensely from lighter structures. Right now the problem is being handled with cylinder shut-off as a main strategy along with electric motors to handle the low end of torque, because the cars are still too heavy.

Likewise, we have downsized engines because they produce less CO2. Unfortunately, the tradeoff is power which benefits as well from lighter vehicle structures. However, the addition of turbos as used in Ford’s EcoBoost brings the power back, at least for now.

Batteries, on the other hand, are still way behind in advances. The potential is certainly there. What’s needed are increases in energy density so as to extend driving range; and lighter weight structures are needed there as well. The other more important part that is needed is lower cost of electrification.

In addition, electrolytes, cathode and anode materials have to change as well. It is the only way to charge faster, as nobody wants to wait twenty minutes to hours just to get an electric top-off on a trip from Detroit to Traverse City.

So, weight is indeed a common denominator whether you prefer EVs or an IC engine vehicle. Heavy vehicles are no longer an option, though, especially as the auto industry moves toward the government mandate of 54.5 mpg by 2025. So, look for major efforts to cut weight in cars. That means more aluminum, more composite materials, even small diesel engines along with additional electric motors, lighter brakes, etc. And do not forget lighter interior components which all add up like audio systems. Nonetheless, making cars smaller rids weight but displays a lack of commitment.

As it pertains to the EyesOn Design at the 2012NAIAS, also look for more aerodynamic styling, all of which must meet future crash tests.

Interior trends are already leaning toward greater roominess even within smaller class vehicles. When I drove the Nissan Leaf for a ride-drive event this past fall, I was surprised at the interior room and perception of spaciousness. So, pay attention to that aspect as you enjoy the 2012 NAIAS. Fact is, adequate room for adult rear passengers is a welcome change from the days of huge coupes out of Detroit that still had scrunched rear-seat passenger room.

Overall concern is, some say the government-mandated 54.5 mpg may require more time beyond current federal government deadlines, especially if the economy tanks again. Frankly, the national debt along with a lack of a national energy policy says differently. America cannot afford to delay increasing gas mileage; which means it also cannot afford delaying its work on lighter but safer body structure for vehicles. It's 2012, for crying out loud, where is GM and Ford's lightweight body structures? Apparently not ready for prime time!

Bottom line is, making cars smaller may meet better mileage requirements, but it seems to be coming at a cost of less passenger space for families. So, this reporter does not apologize for saying the move to small cars is a ruse by the automakers to meet government demands over their customer demands of lightweight, larger vehicles with better but affordable gas mileage. Search your own feelings; you know it's true!

Gloria Jean Ove... wrote on August 26, 2018 - 1:59pm Permalink
Public needs vehicles geared to tall people, large people & people who have disabilities like back knee & hip problems. The seat belts not long enough. Vehicle needs to be high off the ground so we can get in & out of it. Seats are too far away from door. There not enough room in front for drivers. My family is having trouble finding vehicles with all these qualities. We are tall, overweight & health disabilities.