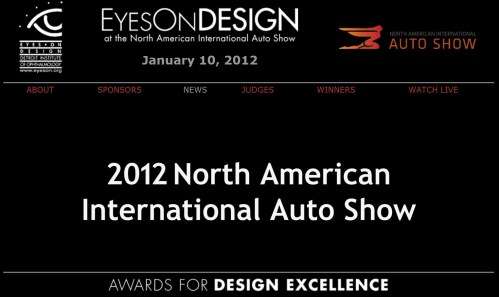 While the Audi A6 won the EyesOn Design Award for production and Porsche 918 RSR for the concept category last year, the 2012 North American International Auto Show (NAIAS) once again will bring a team of designers to choose an award solely on styling
Advertisement

According to the official website for the award, each of The EyesOn Design Awards is recognized by each automaker as a validation of its work by its peers, and it is covered each year by the automotive, national, and international press.

Last year’s awards were dedicated to Chuck Jordan, former General Motors VP of Design who passed away a few months before the 2011 NAIAS. In true fashion, it was Jordan who pushed hard for the event, along with a few other voices from the industry.

For those who may not be aware, Chuck Jordan was legendary in that he helped usher in the modern era of styling at General Motors with the Motorama cars. As the fourth man to hold the position of vice president of GM design, which he did from 1986 until his retirement in 1992, Jordan is credited with a long list of iconic GM designs during the 1950s and '60s, which set the tone for style throughout the entire industry.

He is among the great names at GM, like Irv Rybicki, Bill Mitchell and Harley Earl. It was a mantle that passed to Wayne Cherry and now is in the hands of Ed Welburn.

Envision the Next Winners

For the record, there are two major EyesOn Design events in the Detroit area. The first is the North American International Auto Show. The second is a summer showing on Father’s day on the grounds of the Edsel & Eleanor Ford House in Grosse Pointe. Called the EyesOn Design (EOD), Automotive Design Exhibition, it is a benefit for the Detroit Institute of Ophthalmology. (See the attached photo slideshows of the 2011 show below the main image)

EyesOn Design is one on my favorite awards, as design has a timeless face to it. What may not have looked so great in its production run often becomes a classic years later. That is the nature of auto design as art.

Fact is, I have always been intrigued by styling that collaborates well with sound engineering and function. That is why I enjoyed my time so much working at the GM Studio before I early retired.

Most of today’s designers are educated in the art of Industrial Design. Unfortunately, today’s schools too often seem to focus more on art and style rather than true industrial design which concentrates on fit, form function as well as art form. Too many young students are being cheated of th evalue of an engineering-based styling that accounts heavily on materials and manufacturing feasibility, not just fine lines. The name of the game is indeed industrial design; and that, in my mind, implies all facets to the design.

So, with that in mind, here is one tip that will avail that EyesOn design perspective: The body style has to invoke and resonate a deep passion within the viewer. For it is passion that will make someone walk closer to the car, walk around it, adoring its form; and it will be the catalyst which will force the viewer to sit inside for that closer look and feel.

Of course, I could elaborate on the body lines. Are they too sharp or too smooth? Do they agree with the other lines on the car. What about color? A great design is appealing in any color.

Bottom line is, the art of auto design ends up in the eyes of the beholder. The designer tries to exhibit his or her vision of the future, and wants you to love it as much as he or she had in dreaming up the design. Whether they appeal to your heart is always an unknown until you see the design in person; albeit a photo can get your blood flowing.

Truth is, I view the Creator as the master of impassioned design. So, it is not surprising to me that His children would have an eye for fit, form, function and style. Enjoy the 2012 NAIAS and especially visit the winners of this year’s EyesOn Design Awards.