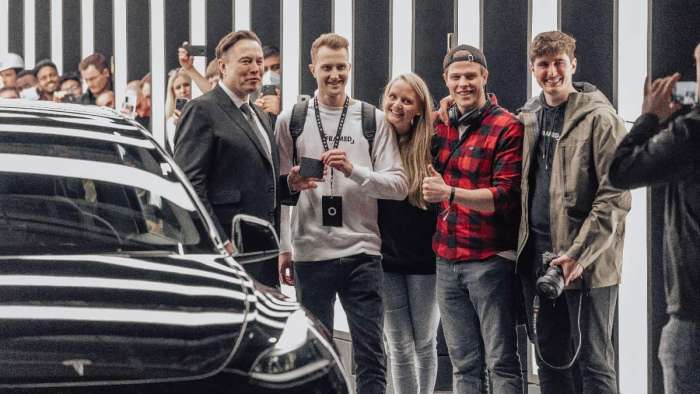 A few hours ago, Bussiness Insider published a story detailing alleged sexual misconduct by Tesla and SpaceX founder Elon Musk. However, several hours prior to this news, there were indications of "unusual" short-seller activity on Tesla stock.
Advertisement

In the story titled “A SpaceX flight attendant said Elon Musk exposed himself and propositioned her for sex, documents show. The company paid $250,000 for her silence.” Business Insider details an incident that took place aboard SpaceX's corporate jet.

According to Bussiness Insider “the incident, which took place in 2016, is alleged in a declaration signed by a friend of the attendant and prepared in support of her claim. The details in this story are drawn from the declaration as well as other documents, including email correspondence and other records shared with Insider by the friend.”

To be clear, this is not a story about Elon Musk’s alleged sexual misconduct. For that, you can read Bussiness Insider’s article in full and make up your own mind regarding the details.

However, one interesting thing that occurred hours before the story broke is “unusual” short seller activity with someone betting large sums of money to be rewarded if tomorrow Tesla’s stock price was to go down.

This suspicious short-seller activity was noted by a company called Unusual Whales. Unusual Whales states that it “uncovers unusual options, stocks, and crypto purchases, to equalize information for the retail investor.”

The Unusual Whales website offers a free “unusual options activity” alert and options profit calculator. The website also offers more sophisticated tools that help in trading options but these are offered for a subscription fee.

If you are unfamiliar with “option contracts”. It is a financial contract that allows you to buy or sell a company’s stock at a predetermined price. This means rather than buying or selling a company’s stock directly, you purchase a contract that says you have the right to buy or sell a stock at a predetermined price, no matter what the stock is trading at that day.

For example, let’s say you have purchased “put options” of Company X. And tomorrow Company X’s stock price falls from $100 to $80. At this point, you can exercise the options contract and force the contract writer to buy Company X’s shares off of you for $100 even though it’s trading at $80. This allows you to make the $20 difference as a profit.

This is a very high-level explanation of options contracts however, in reality, it takes several books to even scratch the complexity of options trading.

Anyways when we bring it back to Tesla. Unusual Whales tweeted out “unusual options activity” in Tesla where someone had paid significant sums of money betting Tesla’s stock price will go down by 10.96% by tomorrow.

Once the story broke, Unusual Whales added to the above tweet saying “Business Insider has just published an alleged sexual misconduct story on Elon Musk. Interestingly, they have done similarly with Dave Portnoy, before $PENN earnings. BI's CEO, Henry Blodget, was accused of securities fraud and banned from the securities industry.”

Interestingly, they have done similarly with Dave Portnoy, before $PENN earnings.

Additionally BI's CEO, Henry Blodget, was accused of securities fraud and banned from the securities industry.

$PENN is the ticker symbol for Penn National Gaming. And Penn has a 36% stake in Barstool Sports, which is run by Dave Portnoy. And the last part about Bussiness Insider’s CEO Henry Blodget refers to, Blodget’s permanent ban from trading any securities following a 2003 charge by the Securities and Exchange Commission for civil securities fraud.

What's interesting is the large bearish flow on $TSLA today, especially at close.

This is interesting information to look at however, Unusual Whales did not directly accuse Bussiness Insider or its CEO of any foul play beyond noting the “unusualness” of the circumstance.

Another “interesting” story circulating around the Twitterverse pertains to the relationship between Bussiness Insider CEO Henry Blodget and Amazon founder Jeff Bezos. Jeff Bezos’ investment was instrumental in getting Bussiness Insider to get going back in 2013.

However, it’s impossible to draw any meaningful conclusion from these “connections” at the moment besides saying they are musings of conspiracy-minded anonymous individuals on Twitter.

Just to be clear, this article unequivocally states there is no evidence linking Bussiness Insider’s CEO with this unusual short-seller activity beyond reporting on Unusual Whales’ tweets.

As of now, it’s impossible to say who the short-seller is and if there was any foul play. However, we will be sure to keep you posted as the story unfolds. Until then, make sure to visit our site torquenews.com/Tesa regularly for the latest updates.

So what do you think? Surprised by the “unusual” short seller activity on Tesla stock? Also, what do you think of some of the conspiracy theories circulating on Twitter? Let me know your thoughts down in the comments.

For more information check out: Tesla Brings Back The Cyberwhistle But It Can Only Be Purchased Using Doge Coin