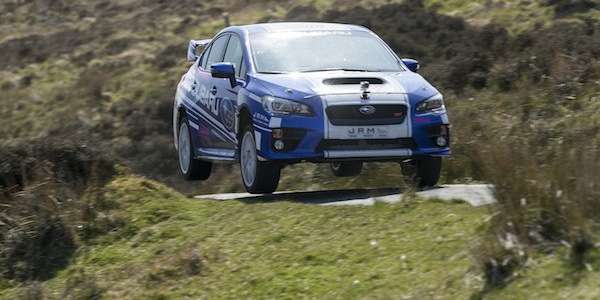 Mark Higgins takes the new 2015 Subaru WRX STI NR4 and runs it hard at Isle of Man TT. What did he have to say about the new rally-ready sedan?
Advertisement

The Isle of Man TT course has varying types of road surfaces and traction needs and is a great test for the 2015 Subaru WRX STI NR4 built by JRM. Mark Higgins knows this course like the back of his hand because this is where he grew up.

Higgins driving a U.S. spec 2015 Subaru WRX STI broke his own track record of the fabled 37-mile course with an average lap speed of 117.510 and a time of 19 minutes and 15 seconds last year.

He now takes the new 2015 NR4-spec Subaru WRX STI built by British motorsport preparation specialist JRM and gives it a thorough test at the Isle of Man TT course.

Higgins spoke positively about JRM’s brand-new, NR4-specification Subaru WRX STI rally car after driving it on the Druidale stage in the Isle of Man this week.

It was the first time Higgins had driven the new rally car at Druidale. It’s a notoriously bumpy stage that has been used in international rallies for decades, but he enjoyed his first taste of the world’s newest production-spec rally car.

Higgins thinks the Isle of Man is a perfect testing ground for the new STI rally car. He said, “Druidale is one of the most challenging stages anywhere in the world and a real test for any car, particularly a new car like the Subaru,” he explained. “But I really enjoyed the car and it performed faultlessly and without any mechanical problems all day.”

The former British Rally Champion was there for a Subaru America PR event that was held during the Isle of Man TT week. He used the car to give passenger rides to members of the automotive media and completed around 60 miles on asphalt. JRM welcomed his comments on its latest rally car before putting it into its current test and development program in the UK.

Higgins thinks there needs to be some adjustments made to the chassis of JRM’s NR4-specification 2015 Subaru WRX STI rally car. He said: “I could feel there is good potential in the chassis and that’s a great start for a car that’s fresh and new. And for a car that looks big, it doesn’t feel that way on a stage. That was a nice surprise because it gives a driver confidence when he’s driving a car hard.”