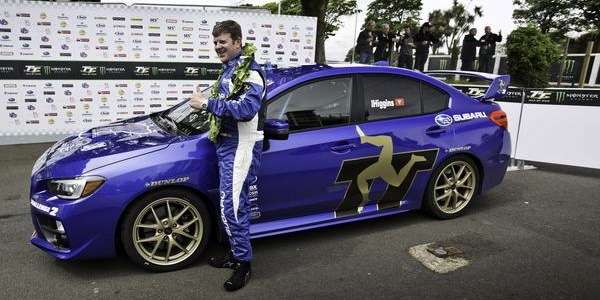 Mark Higgins set a new Isle of Man record in the 2015 Subaru WRX STI. What made Higgins think he could smoke the record?
Advertisement

Subaru announced that a U.S. spec 2015 Subaru WRX STI driven by Mark Higgins set a new lap record of the fabled 37-mile Isle of Man TT Road Course. Higgins smoked the old record he set in 2011 driving a previous generation 2010 Subaru WRX STI. Mark Higgins broke the old record of 115.36 that was set three years ago by hitting an average lap speed of 116.470 and a time of 19.26. Why was Higgins confident he could break his own record?

Higgins knew the new-generation U.S. spec 2015 Subaru WRX STI received upgrades that would make it faster around the 37-mile Isle of Man TT Road Course. Subaru’s global performance flagship model comes with a stiffer chassis for improved performance in the corners. Handling has been enhanced with firmer springs and quicker steering response (13.3:1 ratio) for improved control.

Higgins knew the chassis was better

Mark Higgins, a Manx native, grew up here and he is very familiar with the road. But he is also familiar with the car he was piloting. After setting the record, Higgins said, “It was quite a lap we did today and I am really happy to have another record in the bank. The chassis on this new car is so much better it really allowed me to pick up time in each sector in the more technical parts of the course,”

But the interesting thing that Higgins said was that he thinks he could have driven it even faster. Higgins went on to say, “I think there is definitely time that we left on the course. I lost time on the second part of the track, overshooting my braking point at Sign Post corner. I actually hand-braked the turn in the end, so I feel we can definitely do better.”

Like the 2010 WRX STI performance car that he drove in 2011,The only upgrades made to the stock U.S.-spec 2015 WRX STI, were a FIA-spec roll-cage, racing seat and harness, fire suppression system and modified springs and dampers to handle the sustained high speeds and changing conditions of the course. The 2015 STI was shod with Dunlop Derezza tires and received a high decibel straight exhaust for crowd safety. The speed limiter was also removed from the car.

The TT course shows just how much the 2015 WRX STI received its driving dynamics from Rally racing. Higgins commented, “There is nothing like the TT course in all of racing, it’s just an amazing circuit. Not just because of its length, but the elevation changes, constant surface variations as you shift from town to country roads and the fact that we run roughly 30 mph and then up to 160 plus for much of the race.”

Outright record held by a motorcycle

Who holds the outright lap record on the TT course? It was set in 2013 by a motorcycle. The record is held by John McGuinness who rode a Honda CBR1000RR ‘Fireblade’. McGuinness posted a time of 17 minutes 11.6 seconds, equivalent to an average speed of 131.7mph.

Now that Higgins has set another record with an STI, will he return and try it again in the new-generation 2015 Subaru WRX STI? It sounds like he could have gone faster and wants to try that Sign Post corner again.

Thanks to Chiwawa Master for the Isle of Man TT 2014 Mark Higgins Subaru Lap Record video.