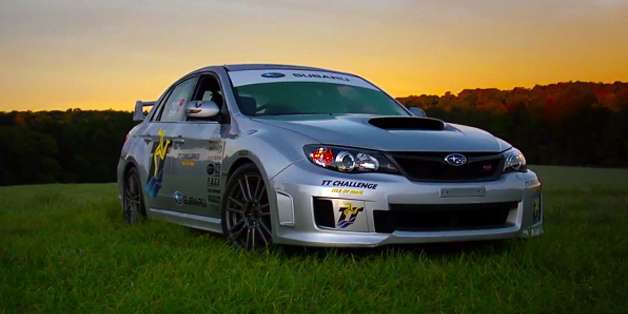 Watch the incredible video as the 2011 Subaru WRX STI driven by Mark Higgins sets a record at the Isle of Man TT course.
Advertisement

Subaru says this record-setting WRW STI is an STI on steroids, and when you see this video clip from this historic run, you will see why. Subaru released this video of the 2011 Subaru WRX STI setting an all-time course record for the historic Isle of Man TT Mountain Course. The car was driven by multiple Rally Champion Mark Higgins on the 37.8 mile road that tours the island that is near the UK. This is where Higgins grew up and he is very familiar with the road. In 1949, the TT became the first venue for the Motorcycle World Championships.

In 2011, Higgins took the U.S. production spec Subaru WRX STI for an incredible ride. The car came with the 305 hp Boxer engine, Symmetrical AWD and a top speed of 162 mph with a 0-60 time in less than 5 seconds. Subaru made some modifications to the car so it would be safe for these incredible speeds. Higgins achieved speeds of 162 mph and a lapped time of 19 minutes 37 seconds over the 37-mile track, navigating more than 200 corners.

The Subaru WRX STI was equipped with a Lifeline fire suppression system, Hockley Motorsports roll cage, motordrive competition seats, Mintex brake pads (with stock calipers and rotors), and a louder open exhaust to warn spectators of the on-coming car. They also turned the speed limiter off which is factory limited at 155 mph. This allowed a highest maximum speed. Other suspension changes included off-the shelf Tien springs and dampers to accommodate the numerous high-speed jumps on the circuit, sending the WRX STI almost four feet off the ground at times. The car ran on street legal Pirelli P Zero Trofeo tires.

Mark Higgins' record lap of the 37.8 mile road course that day, averaged 115.356 mph. During the run, Higgins momentarily lost control of the WRX STI, and then regained it again, at more than 150 mph. In the quote below, Higgins talks through the "moment" at Brey Hill as he maintains control during the incredible mishap.

"This is one of the most daunting tracks I have ever driven, and the most terrifying," said Higgins, a Manx native. "We were only able to get two practice runs and on our second practice I had the biggest "moment" of my career. We had a passenger on the run and so coming into Bray Hill at more than 150 mph, the extra weight compressed the suspension more than on previous runs and shifted the Subaru to the left and then right as I corrected, it was a real tank slapper. The whole thing went by so quickly that we never slowed below 110 mph, and then we were back on the power. It was amazing and the helicopter shots really show just how hairy it really was."

The previous record had been a 100 mph average lap, so this was a real record-breaker and an amazing achievement. Keeping the WRX STI under control was even more amazing as he fishtailed back and forth at 150 mph. Listen and watch as Dominick Infante profiles Mark Higgins' 2011 Subaru WRX STI which holds the record for fastest lap time at the Isle of Man TT Challenge. Also watch the Subaru Isle of Man Record Attempt video.