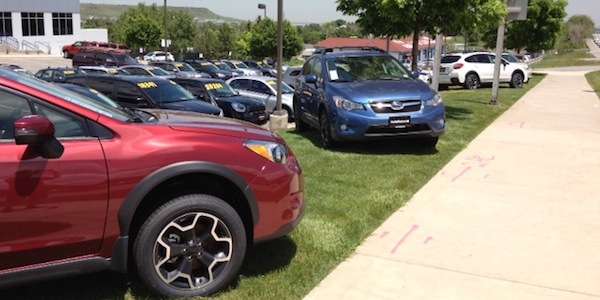 The new 2016 Forester, Outback and WRX/STI are just arriving and the 2015 models are having a record month. What is driving sales?
Advertisement

It was the best June ever for the 2015 Subaru Forester, Outback, XV Crosstrek and WRX/STI models. It’s the 2015 Subaru XV Crosstrek crossover that is up the most year-to-date (YTD) with a 24.2 percent increase. WRX/STI performance sedans and Outback wagon are both up 13.6 percent YTD and Forester is up 8.6 percent.

What is fueling Subaru’s success?

The Subaru brand is experiencing continued growth with 43 consecutive months of year-over-year growth. It’s being fueled by their recreation-purposed vehicles that are appealing to a new generation of buyers with active lifestyles. The iconic WRX/STI performance sedans have been a big hit with performance fans and sales are up with the new-generation updates.

Subaru has created a niche market with their all-wheel-drive vehicles that resonates with buyers all over the globe. Here is the U.S., 60 percent of buyers are new to the brand. This is because Subaru has the products consumers want. “Subaru sales continue to climb because we have the right product, the right positioning and a strong retail network,” said Jeff Walters, senior vice president of sales, Subaru of America, Inc.

Subaru has also received much recognition from the automotive experts like Edmunds.com. Both 2015 Subaru Legacy and 2015 WRX/STI models received “Best Retauned Value Vehicle Awards from Edmunds.

If you want a good investment and have a car that tops the fun to drive meter, the 2015 WRX is the best compact car value on the planet according to Edmunds. With the Mitsubishi Lancer EVO going away, WRX is the one that gets the nod from Edmunds. WRX even beat Toyota’s top overall rating of 52.4 percent in the non-luxury division. How do they figure WRX will retain its value 53.2 percent after five years?...read more.

Edmunds says the newly remodeled 2015 Subaru Legacy four door sedan will retain 48.5 percent of its value after 5 years. Legacy is one of the only models that features all-wheel-drive as standard. They like it for its roomy cabin, upgraded interior and all-weather capability “making the 2015 Subaru Legacy a solid pick for a midsize sedan.”

The new 2016 Forester, Outback and WRX/STI are just arriving and the 2015 models are having a record month. What is driving sales? The brand has positioned itself to take advantage of the fast growing small SUV, crossover and compact performance car segments. It’s a formula that is working well for Subaru in the U.S.