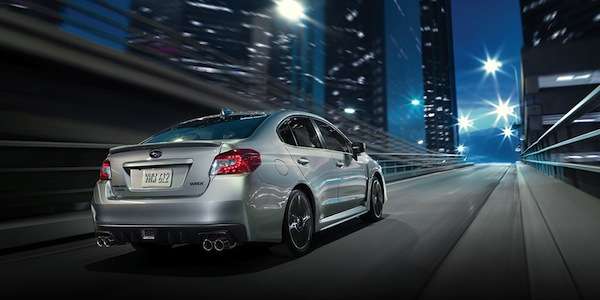 The 2016 Subaru WRX is the best buy in the compact performance class today according to Edmunds. Why did they rate the new Subaru WRX so high?
Advertisement

With new safety, infotainment and refinement for 2016, the Subaru WRX should retain its value even better than the 2015 performance sedan. Edmunds just named the 2015 WRX the most likely compact car in the U.S. to retain its value more than any others after five years. That’s even after they’ve been driven hard and put up wet. Many WRX owners will get the most out of their performance sedans and there will be some that don’t make it five years. That’s just the nature of the entry level compact performance car segment.

If you want a good investment and have a car that tops the fun to drive meter, the 2015 WRX is the best compact car value on the planet according to Edmunds. With the Mitsubishi Lancer EVO going away, WRX is the one that gets the nod from Edmunds. WRX even beat Toyota’s top overall rating of 52.4 percent in the non-luxury division. How do they figure WRX will retain its value 53.2 percent after five years?

Not the first retained value award for WRX

WRX performance sedan earns the same award from Kelly Blue Book as having the best resale value in its class. It’s starts with the WRX being the most affordable all-wheel-drive sports car on the market. KBB says WRX will retain 64.2 percent of its value after 36 months and 49.4 percent after 60 months. WRX also gets the best MPG in its class at 21/28 city/highway.

What else does Edmunds say?

“The redesigned 2015 Subaru WRX reclaims its place as a sport compact performance benchmark. It's got the power and handling that few can match.” They had more good things to say: “Very quick acceleration; impressively sharp handling, especially with the STI; secure grip provided by standard all-wheel drive.” They also had some bad things to say: “Above average amounts of wind and road noise; weak-sounding base stereo; tricky-to-use optional touchscreen; STI's jarring ride quality.”

What we had to say

The new fourth-generation performance car is a rally-bred sports car and offers the performance enthusiast a good dose of healthy performance at a great price ($29,290) including destination. The firmer chassis, retuned suspension, new 2.0-liter engine and new AWD system makes this WRX a more precise-handling and better performing car than the outgoing model. It absolutely devours tight, twisty mountain roads at altitude and the new six-speed manual gearbox made a world of difference. The 2015 Subaru WRX has the power and driving performance of cars nearly twice its price. It delivers on its rally heritage and stays true to its core values of exceptional handling and agility.

Where we did see an issue for WRX was in the cabin’s noise level from outside wind and road noise. Another issue we had with WRX is the weak-sounding standard stereo with 6-speakers AM/FM and HD capability. We would definitely opt for the upgraded harman/kardon premium audio system that is offered for the first time in a WRX.

Performance enthusiasts won’t buy the 2016 Subaru WRX for it’s retained value, but it’s nice to know that when you trade your car off in five years for the new fifth generation WRX you’ll get a good trade in price. You will also have a car that pegs the fun to drive meter.

blah blah wrote on September 6, 2016 - 11:08pm Permalink
I've read a few articles here, and all of them do not answer the question they put up. Using this article as an example, the title is "Why you don’t want to buy the 2016 Subaru WRX in 5 years", but the article is about KBB giving the WRX the best resale value and how amazing the WRX is. That is ENTIRELY opposite of the title.
Some guy wrote on November 3, 2016 - 12:40pm Permalink
Because it's going to hold its value and still be expensive for a 5 year old vehicle....

Tesla Contemplates A New Strategy for China Retail even As Sales Boom
Jay Leno on Elon Musk & EVs: “I Think He Should Get ... Credit"
END_OF_DOCUMENT_TOKEN_TO_BE_REPLACED