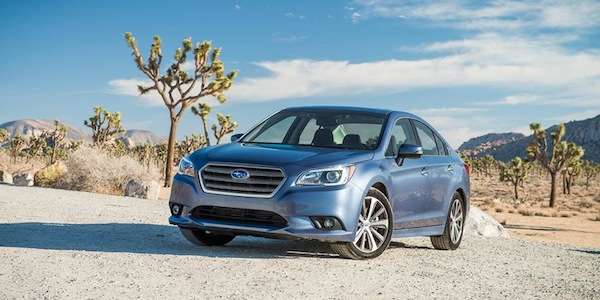 Subaru received two Best Value Awards from Edmunds.com. The 2015 Subaru Legacy sedan and WRX performance compact. What did They say about Legacy?
Advertisement

The Subaru Legacy received a complete redesign for the 2015 model year and has been receiving plenty of accolades from the experts. Legacy sedan gets another award, this time from Edmunds.com who says the new sedan will retain its value better than all others in the Midsize Car segment.

Edmunds Best Retained Value Awards recognize the brands and 2015 models that have the highest projected residual values after five years based on their average "cash" True Market Value (TMV) price during their first five months in the market, or for vehicles introduced in November or December of 2014, through March 2015.

Edmunds says the newly remodeled Legacy four door sedan will retain 48.5 percent of its value after 5 years. Legacy is one of the only models that features all-wheel-drive as standard. They like it for its roomy cabin, upgraded interior and all-weather capability “making the 2015 Subaru Legacy a solid pick for a midsize sedan.”

Edmunds also said, the 2015 Subaru Legacy’s new look, improved fuel mileage, increased passenger comfort and new safety features make the redesigned sedan a more competitive sedan among its midsize rivals. What they didn’t like was its “lackluster acceleration” and “stiffer ride” compared to many competitors.

The Legacy sedan also won a similar top retained value award from Kelly Blue Book in January.
Kelly Blue Book’s (KBB) Best Resale Value Awards recognized the 2015 Subaru Legacy sedans for its projected retained value through the initial five-year ownership period. Every new car drops in value when they are driven off the dealers lot, and some retain their value better than others like the Legacy. KBB found the new sedan to be
...read more.

We test drove the new Legacy last summer just after it was launched in the U.S. market. The new 2015 Legacy has received a complete remodel and gets a number of new high-tech goodies, safety features, improved fuel economy and extensive quietening revisions. It comes standard with Subaru’s excellent all-wheel drive system making it an ideal all-weather vehicle. What impressed us most this week, was the new Legacy’s level of safety with improved visibility, Rear Cross Traffic Alert and it’s standard new-generation EyeSight safety system making it the safest new mid-size sedan on the road.

According to Edmunds.com, the new 2015 Subaru Legacy and 2015 WRX are tops when it comes to retaining their value better than any other in the mid-size sedan and compact car segments. They are also the best bet if rain and snow accompany your commute.