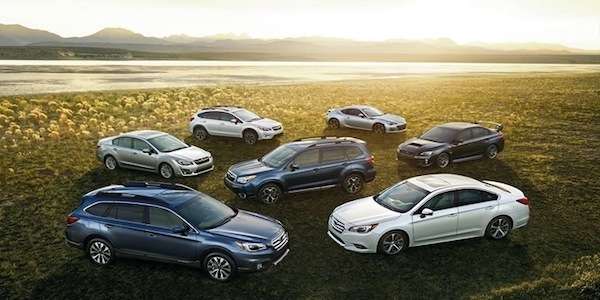 The Subaru brand has been recognized by Kelly Blue Book as being the top 2015 Best Resale Value Brand. Subaru also picked up three individual vehicle segment awards for the 2015 WRX, 2015 Legacy and 2015 Impreza models.

Kelly Blue Book’s (KBB) Best Resale Value Awards recognize 2015 model-year vehicles for their projected retained value through the initial five-year ownership period. Every new car drops in value when they are driven off the dealers lot, and some retain their value better than others. KBB provides new and used vehicle information for consumers so they can make more informed car-buying decisions.

All of Subaru’s vehicles included

KBB says they establish these new car values by reviewing statistical models built upon millions of transactions to come up with the results for consumers. Vehicles that earn the highest five-year residual values, expressed as a percentage of their original Manufacturer’s Suggested Retail Price (MSRP), are selected for individual prestigious awards.

Forester singled out by NADA

Subaru also just recently received recognition for the 2015 Forester. In a recent vehicle retention value report by NADA, the Used Car Guide analysts detailed the one-year performance of all-new, or heavily redesigned mainstream car and truck models. They found the new-generation 2015 Subaru Forester ranks #2 on the list for vehicles that best retain their value.

The Subaru brand is flying high and the Japanese automaker has set new sales records for the past six years. They created a niche market with their multi-use all-wheel-drive vehicles and consumers are impressed with the brands sporty driving dynamics, utility and safety features. Subaru is the only manufacturer with IIHS Top Safety Picks for all models in their lineup for six years running (2010-2015). The brand is doing many things right and KBB says Subaru vehicles are tops in retaining their value through the initial five-year ownership period.

Brian Foster wrote on January 26, 2015 - 12:20am Permalink
Just a bit more current information pertaining to your question of resale value. I sent you an email recently about our inventory coming in on the Outback, and the one you wish to purchase. If the Carbide Gray with black interior happens to be pre-sold, we'll just be as aggressive as possible to securing another one for you.