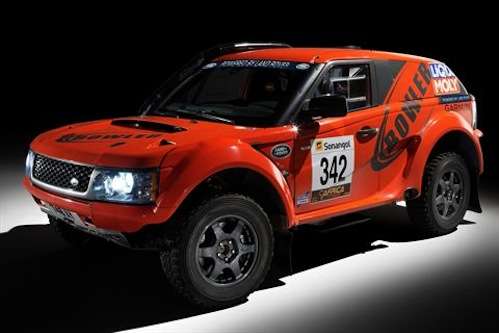 Land Rover and Bowler have agreed to a brand partnership between the two British companies that will help both realize greater off-road performance success.
Advertisement

When carmakers have a chance to learn from the high-performance racing industry they jump at the chance to do so. Most brands have a partnership with a racing team and performance division that help develop the latest performance technology that ends up in their production vehicles. But what does Range Rover, who has the most capable off-road production vehicle in the world, do to improve? They join up with Bowler, who is the UK-based manufacturer of all-terrain performance cars and rally raid vehicles.

The two companies have already had a ten-year relationship, but the new agreement will formalize the partnership and allow both companies to continue to get better at what they do. The new formal brand agreement was officially announced by Land Rover on Thursday.

How will Bowler benefit?

Bowler will begin badging “Powered by Land Rover” on all their competition vehicles and marketing materials. Bowler has been using Land Rover equipment for decades to gain the success that they have in off-road racing. The company's latest models, the EXR rally raid competition car and the road-going EXR S both use modified engines, chassis and other components from the Range Rover Sport. But now Bowler will benefit from access to powertrain and chassis components and engineering and technical support from Land Rover.

Drew Bowler, Managing Director of Bowler, said: "It is Land Rover's support as well as its technology that has helped Bowler to gain an incredibly strong reputation for extreme off-road performance over the last two decades.  And as we embark on a new era for the business - introducing our first model engineered for use outside competition racing - I'm very pleased that the relationship has been formalized.”

Land Rover will get some extreme performance know-how

Land Rover will benefit in a number of ways. They will first get a structured piece of parts business from Bowler. The new formal partnership will allow Land Rover's engineers to stretch themselves creatively and technically on an extreme performance-orientated program that brings further knowledge to the core road-going Land Rover range.

Mark Cameron, Land Rover Brand Experience Director, Global Marketing, said: "Bowler vehicles demonstrate the kind of performance, ride, handling and chassis dynamics that a vehicle powered by Land Rover is capable of when taken to the extreme and liberated of most practical constraints.

The 2012 Land Rover and its siblings are already the most capable off-road vehicles on the planet as my journalism partner Don Bain and I found out at the Rocky Mountain Drive Experience. But this new agreement with Bowler will enable the British company to venture into areas of performance not currently available that will eventually end up in future production vehicles. Look for some new exciting technology to come from Land Rover in the near future.