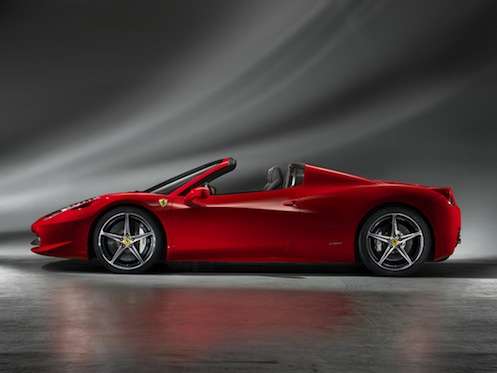 Watch this video of a Ferrari 458 Spider owned by Stephanie Pratt’s boyfriend run over a NYPD cops foot as he gets a parking ticket.
Advertisement

As Damian Morys was walking around Soho in New York City, he spotted a Ferrari 458 Spider and wondered over to get a better look at the Italian sports car. As he got closer, Morys saw that a cop was standing next to the red 458 Spider and was writing a parking ticket. With his video camera in hand, he started recording what he thought would make a cool video. Damian says, “little did I know what I was in for.”

As soon as he started recording, that is when things started to get interesting. The owner of the car who turned out to be the boyfriend of Stephanie Pratt from the MTV hit show, The Hills, walks out and gets in his shiny sports car and closes the door. Apparently he didn’t like the fact he was getting a ticket and made a stupid move by trying to drive off.

Pratt’s boyfriend starts the Ferrari and starts moving since he is refusing to accept the ticket for the NYPD traffic cop. Morys said the car was parked in a hotel zone and “I myself don't understand why the cop was giving him the ticket, it was approved by the hotel that the car was parked there.”

The cop tells the driver to stop and smacks the window hard with his hand yelling at him telling him that he is running over his foot. The NYPD cop is really upset at this point and yanks Pratt’s boyfriend out the car and throws him on the ground. A scuffle takes place and another cop shows up to help subdue the out-of-control boyfriend.

The cops get him handcuffed and keep him on the ground. The police office is visibly hurting and hobbles on his foot as he tries to finish writing the parking ticket. A third and fourth cop show up and finally put the handcuffed driver into a police car. Stephanie Pratt is seen watching as the cops put her boyfriend into the back of the NYPD squad car.

Pratt gets into the red Ferrari 458 Spider and more than likely heads to the police station to bail her boyfriend out of jail. Morys says the beautiful Ferrari did suffer some damage from the cop slamming the door into a cab and some scuffs by the hood and front fender. Morys says, “it was a pretty crazy situation, I was definitely at the right place at the right time!”

Maybe Stephanie Pratt’s boyfriend will learn to accept a $20 parking ticket on his Ferrari 458 Spider next time rather than resist an officer and get taken to jail.

Watch the scene unfold in the video below.