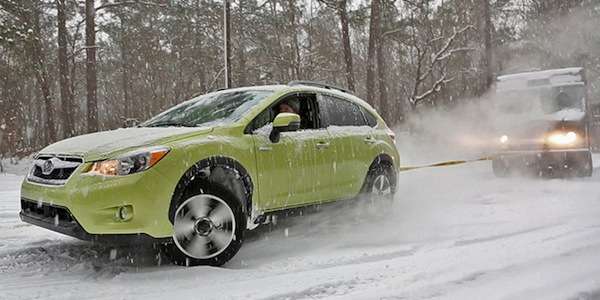 In a rare snowstorm in North Carolina, a 2014 Subaru XV Crosstrek Hybrid helps pull stranded motorists from the snow including a UPS truck.
Advertisement

What does an owner of a 2014 Subaru XV Crosstrek Hybrid do in a rare snowstorm in North Carolina? He uses it as a tow truck and pulls out stranded motorists who don’t know how to drive in the snow, and shouldn’t even be out in it. That’s what Ezra Dyer did with his new Plasma Green Pearl 2014 XV Crosstrek Hybrid crossover.

Ezra Dyer says, “Subaru tow truck, ready for business.” He visits Lowe’s and buys a forged steel hook, which he shackles to the Subaru’s tow eye to create a beefy attachment point for the tow strap. He figures that when the storm hits, he’ll just cruise around in the all-wheel-drive Subaru and rescue motorists who are stuck. He gets a lot more action than he bargained for.

Dyer first see’s a UPS truck and gets the big green truck farther than anyone else. He then pulls out a Mercury Grand Marquis sedan, Chevy van and even a Toyota FJ Cruiser who must be afraid to use the all-wheel-drive. He keeps busy as drivers are stuck in the snow as they are out on the North Carolina roads in the unexpected snow storm.

There aren’t a lot of Subarus sold in the south, but this XV Crosstrek Hybrid owner makes good use of the multi-purpose crossover. XV Crosstrek Hybrid offers all the capability and versatility of the gasoline XV, but adds the benefits of a hybrid powertrain, including higher fuel efficiency.

The XV Crosstrek Hybrid shares the gasoline model’s Symmetrical All-Wheel Drive and chassis capability, including 8.7 inches of ground clearance. This is ideal for snowstorms like the freak one that hit the south. But Dyer didn’t even get close to achieving 31 mpg combined fuel-mileage with his hybrid on this day.

The Active Torque Split version of Symmetrical AWD provides the same function and benefits as in the XV Crosstrek gasoline model. The system adjusts the front-to-rear torque distribution in response to acceleration, cornering and road conditions. Subaru is appealing to a new generation of buyers like Dyer who are active and sports enthusiasts. Subaru XV is touted not only the fuel economy, but more so the off-road capabilities of the new hybrid XV.

Subaru doesn’t really have any competition in the hybrid all-wheel-drive market and the XV Crosstrtek keeps with their core values of providing multi-use vehicles with a “go-anywhere” attitude. It seems to be working with new younger buyers. Subaru’s sales last year were made up of close to 60 percent who have never purchased a Subaru product before. Dyer is one of those buyers who is now "hooked" on the XV Crosstrek's all-wheel-drive capabilities.

There aren’t a lot of Subarus sold in the south, but after southerners in North Carolina experienced the unusual snowstorm and see this 2014 Subaru XV Crosstrek Hybrid in action, that could change.