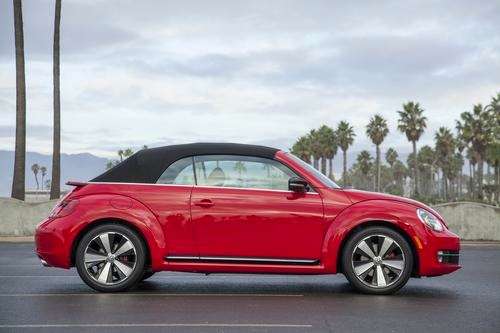 The VW Beetle Convertible is back with world premiere in LA

The iconic 2013 Volkswagen Beetle Convertible is coming back to the U.S. market and makes its world debut in LA.
Advertisement

The 2013 Volkswagen Beetle Convertible is back and will be launched in the U.S. shortly after it makes its world debut at the Los Angeles Auto Show. Volkswagen will launch the new 2013 VW Beetle Convertible next month and it will be priced from $24,995. The new soft-top Beetle will be more powerful, sporty and fuel-efficient. The new soft-top will open on the fly in just 9.5 seconds.

The new 2013 convertible is wider and longer than the last Beetle rag top and has additional laser welds for increased body stiffness. The new convertible has a lower roofline than the coupe’s and features a new heatable rear window made of tempered safety glass. The top latches and unlatches automatically at the touch of a button, which is located on the upper rail of the windshield surround. The top lowers in 9.5 seconds, raises in 11.0 seconds and can be raised and lowered at speeds of up to 31 mph, which is unusually high for a convertible.

The Beetle TDI Clean Diesel will be the most fuel-efficient convertible on the road. The 2.0-liter diesel produces 140 horsepower and 236 pound-feet of torque and has an EPA estimated fuel economy rating of 28/41 city/highway mpg when equipped with the manual transmission.

Seven flavors of the Beetle convertible

The Beetle Turbo Convertible with Sound and Navigation is the topline Beetle at ($31,195) and adds: leather seating surfaces, door trims, and dashboard; sport seats; and the RNS 315 navigation system. The ‘60s Edition’ ($32,395 ) has two-tone leather seats and Denim Blue paint: it is available only with the DSG transmission.