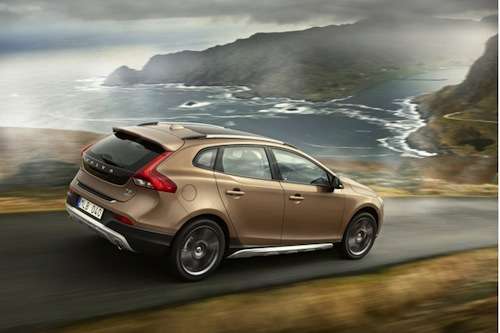 But the biggest difference is the V40 Cross Country comes with all-wheel-drive and rides 40 mm higher than the standard V40. The Cross Country models also get some other unique features like larger wheels up to 19-inch, a dark contrasting front bumper, honeycomb mesh grille and upright DRL-lights and a contrasting rear bumper with integrated skid plate.

The new crossover V40 is certainly off-road and all-weather capable and features a number of engines from a gasoline high-performance turbo producing 254 horsepower, to a fuel-efficient 1.6-liter diesel. Powerplants are mated to either a six-speed manual or a six-speed Powershift automatic transmission. Volvo says all engine and transmission versions will feature start-stop and braking energy regeneration.

Making the V40 Cross Country even more capable off-road, the crossover features Hill Descent Control on the T5 version with All Wheel Drive, which controls the car's speed automatically when traversing steep inclines. The V40 Cross Country also has a Hill Hold function that makes starting on a hill easy.

The V40 Cross Country features extra storage for those weekend adventures. It gets two cup-holders and an integrated 12V power outlet in the console in front of the armrest. The glove compartment includes space for two soft-drinks cans or bottles that are kept cool with cold air from the cars Climate Control system.

Other convenient features include, a sunglass compartment above the driver's door, an integrated cup holder in the rear seat, and extra storage under the instrument panel, on the front seat cushions, on the front seat backrests and on the outside of the rear seats. For winter driving, a specially designed, drained storage unit for an ice scraper in both front door panels is included.

Initially, the 2013 Volvo V40 Cross Country will only be offered in Europe and China. Volvo has not announced when the V40 all-roader will be offered in the U.S. Production will begin in November 2012.