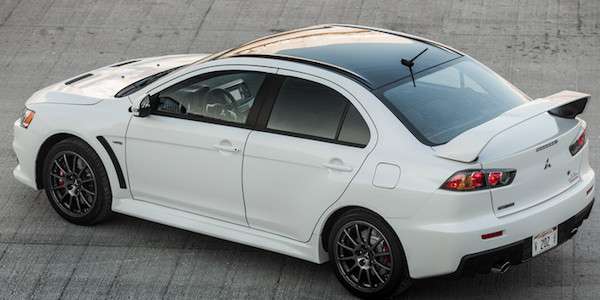 The bidding finished November 21 when it concluded at the 29th annual MS dinner auction at the Loews Coronado Bay Resort in Coronado, California. The bidding price started at $37,201.05 and there were 43 bids on the 2015 Mitsubishi Lancer Evolution Final Edition #0001. The auction ended at 10:00pm on Saturday and the #US0001 sold for $46,200.

The special edition EVO is in Cyprus, California at Mitsubishi Motors North America headquarters where the winning bidder can pick up the performance sedan. Mitsubishi says there’s only 35 miles on the clock on the Rally Red performance car with black interior.

1,600 Final Editions will be shipped to the U.S. and each will come with a specific numbered plaque on the center console. 2015 EVO Final Edition models are upgraded inside with a black headliner, pillars, sun visors and assist handles, and red accent stitching on the sport seats, steering wheel, shift knob, console lid, floor mats and e-brake handle.

The Lancer Evolution Final Edition bumps up horsepower to 303 and torque to 305 lb-ft. Stopping performance is enhanced with lightweight two-piece Brembo brake rotors up front, and the suspension gets Bilstein shocks and Eibach springs at all four corners. As with all 2015 Lancer Evolutions, the 1600 Final Editions feature Mitsubishi's Super All Wheel control.

The new owner of the #US0001 Mitsubishi Lancer EVO Final Edition paid a $8,999 premium to drive home this special Rally Red model. Mitsubishi says the EVO's time is gone and performance enthusiasts will say good bye to the Lancer EVO forever after the last one rolls off the assembly line this year.