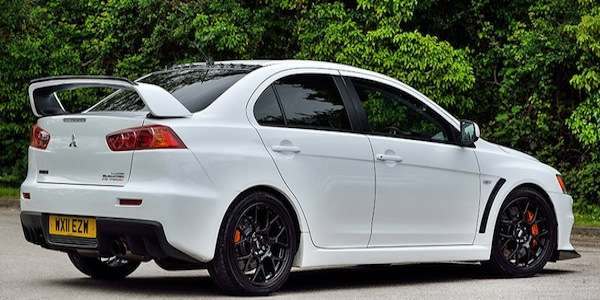 Mitsubishi’s executive vice president in the U.S. says Lancer Evolution’s time is gone. Will high-performance be a part of the brand’s new direction?
Advertisement

As the 2015 Lancer Evolution begins arriving at Mitsubishi showrooms, performance fans are wondering why this will be the last rally-bred performance sedan. Mitsubishi has not been silent about their intentions for a new direction for the brand and it won’t include the Lancer Evolution as a core vehicle. Mitsubishi Motors Corporation (MMC) will be featuring new hybrid plug-in technology across their entire lineup.

2015 Lancer Evolutions are arriving now in Mitsubishi showrooms across the U.S. and Canada and it will be the last of this generation of sports cars. Motor Trend reported that Don Swearingen, Mitsubishi's executive vice president in the U.S, said the EVO’s time has come and gone and it’s going away forever after the Japanese automaker releases a final special-edition model at the end of next year.

MUST SEE: 2015 Lancer EVO Special Edition coming to the U.S. next year

Swearingen told MT, "It's time has come and gone," and then said that the sound of tomorrow is the MiEV Evolution III, which did extremely well at Pikes Peak this year. Don Swearingen went on to say about the Lancer Evolution, "It's a great 'halo" for the brand, but at the end of the day, we only sell about 200 a month."

Even though Lancer Evolution fans are sad to see the high-performance model go away forever, MMC isn’t abandoning performance models, they will just be coming with a new plug-in-hybrid electric vehicle (PHEV) drivetrain. It’s called their new eco-performance drivetrain and it could be more powerful than the outgoing Lancer Evolutions powertrain. We can see the future now with the new Concept XR-PHEV that made its North American debut in LA.

Mitsubishi’s North American boss says the EVO’s time is gone. The 2015 Mitsubishi Lancer Evolution is going away after the last special edition model rolls off the assembly line, but there will be a new generation of hot-performing plug-in hybrid cars coming from MMC. Stay tuned.

Tesla Contemplates A New Strategy for China Retail even As Sales Boom
Jay Leno on Elon Musk & EVs: “I Think He Should Get ... Credit"
END_OF_DOCUMENT_TOKEN_TO_BE_REPLACED