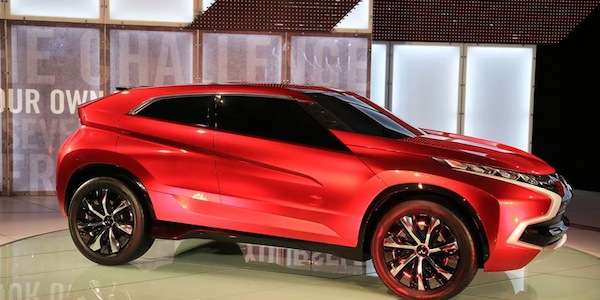 High-performance will be a part of new Mitsubishi branding

The new Mitsubishi Concept XR-PHEV may not be the successor to the 2015 Lancer Evolution, but it points to a future with high-performance.
Advertisement

The 2015 Mitsubishi Lancer Evolution will be the last production EVO we see here in the U.S., but the brands high-performance future is not dead. Mitsubishi Motors North America, Inc. has unveiled the futuristic Concept XR-PHEV at the 2014 Los Angeles Auto Show. This was its North American debut and it points to what Mitsubishi has in mind for the U.S. market. It features a new bold styling, high performance and an efficient plug-in-hybrid electric vehicle drivetrain.

Mitsubishi Motors brings the Concept XR-PHEV to LA to show what the brand will be doing here in the U.S. market. The brand has struggled, but is trying to recapture their footing in the U.S. This futuristic crossover design study hints at the upcoming direction of U.S. Mitsubishi cars

MUST SEE: One reason you don’t want the 2015 Mitsubishi Lancer Evolution

Mitsubishi Motors NA Executive Vice President, Don Swearingen said at the unveiling, "We brought the Concept XR-PHEV to LA so that we could talk about our new design direction and how future products will be taking clues from its dynamic lines. We also brought it to LA to reinforce the message that Mitsubishi is here to stay in the United States.  As we regrow the brand we will introduce new models while updating existing ones, creating a new look and a new value proposition for the brand."

While we don’t know what the 2015 MItsubishi Lancer Evolution successor will look like, we do know it will come with a new eco-performance drivetrain that will feature a high-performance yet efficient plug-in-hybrid electric vehicle (PHEV) technology similar to the Mitsubishi Concept XR-PHEV. Mitsubishi has perfected the technology through their continued involvement in motorsports. Stay tuned.