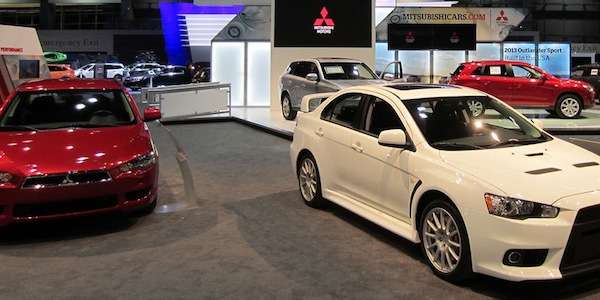 The 2015 Mitsubishi Lancer Evolution is getting ready to make its dealer launch, but it will be missing one important component.
Advertisement

Mitsubishi dealers are taking orders now for the 2015 Lancer Evolution, but there’s one good reason you don’t want it and should buy the 2014 EVO instead. Mitsubishi Motors North America has just reported October sales for the 2014 Lancer Evolution performance car and buyers are snatching them up at a record clip. There may be a good reason why performance enthusiasts are buying the last of the 2014 models.

Mitsubishi's reported vehicle sales for October were boosted by robust sales of the sporty and affordably-priced Lancer sports sedan (up 17.5 percent from last October), as well as the ultra-high-performance Lancer Evolution luxury sports sedan which saw sales up 10.5 percent year-to-date. Buyers don’t seem to be waiting for the newer 2015 Lancer Evolution model. And there’s one good reason to buy a 2014 EVO and not the 2015 model.

Fans are disappointed in the Recaro seats being discontinued for the 2015 models and sales could suffer greatly because of it. It looks like EVO fans are buying the last of the 2014 models that still offer the performance seats. And the 2015 models don’t have much new to offer that would make buyers wait for the new models. There are still 2014 Lancer Evolutions on dealer lots, but they will be selling fast.

The 2015 Lancer Evolution is going out with a whimper and doesn’t get but a few upgrades. MMNA didn’t even release color images of the last EVO and only offered black and white shots of the last model. It makes sense that Mitsubishi wouldn’t put a lot of focus on a model that is being discontinued.

The only new features the last EVO will get is heated side view mirrors with turn indicators and a drop cup holder with lid. That’s the only changes made to all 2015 Lancer Evolution models in the lineup. The GSR and MR models get a few updates to their trim packages.

The 2014 Mitsubishi Lancer Evolution sales are up 10.5 percent year to date and will likely be gone soon. The new 2015 Lancer Evolution models will be missing the Recaro racing seats and fans are disappointed. So if you were waiting for the new 2015 EVO expecting the same equipment, you might want to get a 2014 model before they are gone.

Troy Gillis wrote on November 4, 2014 - 10:02pm Permalink
You should clarify that the USA version of the Evo doesn't get the Recaro's, but the Canadian version does have them.
Sai wrote on May 16, 2015 - 7:06am Permalink
Yea I noticed that because I've been looking for one and I thought the American version was better but I was wrong
donnie wrote on January 5, 2015 - 8:27pm Permalink
I will trade my '14 in,i hate the recaros,they are designed for Japanese people.very uncomfortable.
Gilbrim wrote on July 31, 2016 - 1:44am Permalink
You still have your recaro seats? I just bought the 2015 evo and im looking to swap
Sombath Sun wrote on January 11, 2015 - 10:14pm Permalink
Have to admit, Recaros are the best! I love these seats so much! I sold my Evo X and drive my wifey's Venza leather seats, damn my neck hurts, feels like sitting on a rock, back pain, and am only 30. Mitsubishi is making a big mistake. Why not be like Nissan, their Nismo Juke, the Recaros are optional. Mitsu, you stink..
Chris wrote on January 24, 2015 - 6:48pm Permalink
Did you read the full article? They clearly can't make them optional if they're doing away with them because of an airbag issue. They won't rework the airbag system depending on whether or not you select a Recaro option..
Nick wrote on July 15, 2015 - 10:22pm Permalink
I had a 2010 and 2013 MR before getting my 2015 MR and love the new seats. They are so much more comfortable than the Recaros. The previous poster was right, they are designed for Japanese people with a skinny rear end.
Smelly wrote on March 21, 2016 - 10:57am Permalink
Agree with original poster. If you are built like a little girl the recaros are great but if your built like a man 6'4" 260 lbs the recaros suck ass. Glad the 15s have comfortable seats.