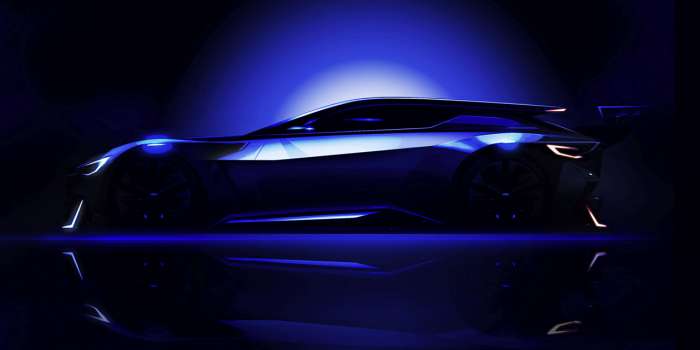 It may seem like pure fantasy, but the new Subaru BRZ high-performance Sports Tourer could become reality someday. For those gamers who will be driving these concept cars on the new Gran Turismo 6 from Sony PlayStation, it will seem real enough. Mercedes unveiled the AMG Vision Gran Turismo as a real concept at the LA Auto Show and it looks like the digital world of gaming is beginning to influence the real world of automotive design in a big way.

Now Subaru has revealed a new concept that looks a lot like a new BRZ Sports Tourer that would be the ultimate high-performance sports tourer. The Japanese automaker is calling it the Subaru GT Vision. It's a great place for automakers to test out their new designs in the digital world before they actually bring a production concept to the auto shows. They can even test consumer reaction before launching it into production.

Is this the way cars will be designed and tested in the future? The founder and producer of Gran Turismo series Kazunori Yamauchi, recreated Jay Leno’s heavily modified 1966 Oldsmobile Toronado to set it up for the game. When Leno drives the virtual car, he likes what Yamauchi has created in the virtual world of gaming, and says it's a very accurate representation of the real car the way it feels and drives.

Subaru's high-performance Gran Turismo Vision concept will be made available for download in early 2014, joining the Mercedes-Benz AMG Vision Gran Turismo concept. Vision Gran Turismo is a project in which the world's automakers and top global brands develop a concept car for the fans of "Gran Turismo." to race in the digital world.

The Mercedes-Benz AMG Vision Gran Turismo will be the car that crowns the opening of this innovative collaboration. Yamauchi said, "Would you be willing to design your rendition of Gran Turismo for us?" The name of the video game "Gran Turismo" GT, refers to a 2 door sports car, a grand touring car in the automotive world.

Many of the worlds auto manufacturers are responding and delivering their Gran Turismo renditions to the game. Subaru’s design appears to be a BRZ Shooting Brake similar to the Cross Sport Design Concept that was unveiled at the Tokyo Motor Show 2013 last month. So that concept could be the forerunner of an actual future BRZ sports tourer.

But what makes the Cross Sport Design Concept most interesting is that Subaru says it allows for “brisk driving” and is what Subaru perceives to be the next trend in urban SUVs. Subaru offered few other details at the show, but the two-door wagon is rear-wheel drive, features two large rear exhaust outlets and is believed to be based on the BRZ platform.

Vision Gran Turismo is a 15th anniversary festival that will be hosted by automotive manufacturers, Gran Turismo, and users around the globe. Gran Turismo 6 says, “The cars delivered will appear one after another in Gran Turismo 6, and as everyone drives these cars, the ring of the festival will continue to grow.”

Maybe we are seeing the future of how automakers will design their future cars and test them in the digital world first. Will the Subaru GT Vision be a future BRZ Sports Tourer with an STI badge?

Jeong wrote on May 23, 2014 - 8:21pm Permalink
I see GM is opting out of the NUMMI venutre with Toyota after 25 years. I suppose that makes sense, in that in all those 25 years GM never seemed to learn much if anything from Toyota's manufacturing approach.But I do remember the introduction of the first NUMMI car badged for GM: the 1985 (or was it 86?) Chevy Nova, which was really a Corolla. I remember all those GM/EDS workers and GM/EDS suppliers who were glad they could finally get a quality car with a GM badge.I remember the Detroit-area TV ads which talked about the Nova's 'tight fit' and 'attention to detail' -- clearly GM's advertising arm understood clearly the relative appeal of the imports even if their executive staff didn't.Of course, the California TV ads for the Nova were quite different. They talked extensively about how it was manufactured just like cars from Japan, and ended with the slogan "Nova -- Imported from America".The NUMMI was GM's real chance, of course. They could have copied everything that Toyota did and at least become competitive. And they had that great opportunity with Saturn -- the new company in which all the rules were written afresh. But some how, some way, GM couldn't make it work.