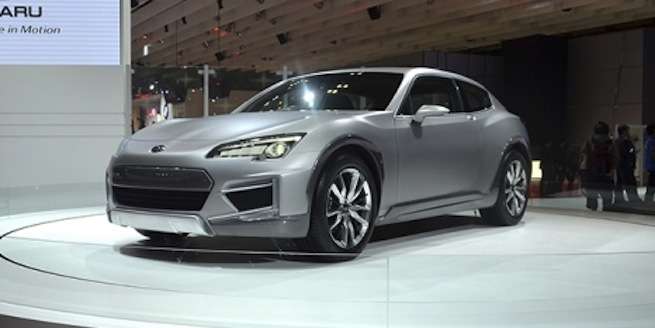 Is Subaru dreaming up a BRZ Shooting Brake?

Subaru unveiled the Cross Sport Design Concept at the Tokyo Motor Show 2013. Is it the forerunner of a future BRZ Shooting Brake?
Advertisement

Subaru has unveiled the new Cross Sport Design Concept. Could it really be a forerunner of a future BRZ Shooting Brake? The concept car recently made its world premiere at the Tokyo Motor Show 2013. The unique car flew under the radar at the show, but in a revealing interview with motoring.com.au at the show, Subaru insiders revealed some interesting information.

In a press release before the show, Subaru told us the Cross Sport Design Concept is a combination of “sport” and “utility.” Both aspects which have been refined by Subaru over the years. The body is compact with overall length of 4,300 mm. It featured things like easy seat access, comfortable interior, and abundant luggage space.

But what what makes the Cross Sport Design Concept most interesting is that Subaru says it allows for “brisk driving” and is what Subaru perceives to be the next trend in urban SUVs. Subaru offered few other details, but the two-door wagon is rear-wheel drive, features two large rear exhaust outlets and is believed to be based on the BRZ platform.

Would Subaru, who is conservative in their offerings, really be serious? The source said, “This is a pure concept. It’s there to gauge interest. It’s a traditional concept car to get feedback. But we can’t continue to produce just three-box sedans. We’ve got to continue to explore options.”

It looks like Subaru is testing the waters to see if consumer interest is there for a BRZ Shooting Brake. Subaru saw how successful the BRZ project has been, and will continue to explore “out-of-the-box” ideas in the future. Unfortunately it doesn’t look like a convertible BRZ will be one of them. As we reported here, Subaru says it has no plans to offer a convertible version of its BRZ based on the Toyota FT-86 Open concept, which made another appearance at the recent Tokyo Motor Show.

But in this writers opinion, Subaru should definitely pursue the idea of the BRZ Shooting Brake. If Subaru would put a 300+ hp turbo four cylinder Boxer powerplant and a sport-tuned suspension in this BRZ SUV, buyers would storm Subaru showrooms to get it. Tell us your opinion of a BRZ Shooting Brake.

Jonny wrote on November 30, 2013 - 1:02am Permalink
Great concept - everything I want in a car it appears. Needs to be AWD with great handling AND ride comfort AND the high quality interior ie comfort, sport and utility. A bit of ground clearance is ok and practical but too much means unpleasant trade offs in either ride quality or handling. Design is close although that very front of the BRZ, that plasticky bit on the grille seems unnecessary and a bit ugly ( the 86 didn't need that). I normally don't go for wagons but the design of this seems something special. Why not give it some unique wheels like the XV? Much better than the XV though which doesn't work for me on the sport/handling front. Oh, and give it a strong engine but not one of those fugly bogan bonnet scoops. I'd rather skip the extra power than put up with one of those unsightly things
Mike wrote on December 3, 2013 - 10:52pm Permalink
I agree with Jonny, except I don't mind the hood scoop. Give me one of these with a turbo AWD system and let me have some fun!
Kestas wrote on December 8, 2013 - 11:48am Permalink
it looks as if it will be rear wheels powered. If so, I'm not interested. Subaru has become a pain.. Impreza looks like crap and XV is looks too much like an SUV (not to mention that it also looks like crap). I have my second five-door Impreza right now (2005) and unfortunatelly there is nothing in Subaru line-up I would like to replace it with. This could be it, but only with AWD and not a very powerfull engine, preferably diesel. Unfortunatelly, this seems unrealistic.