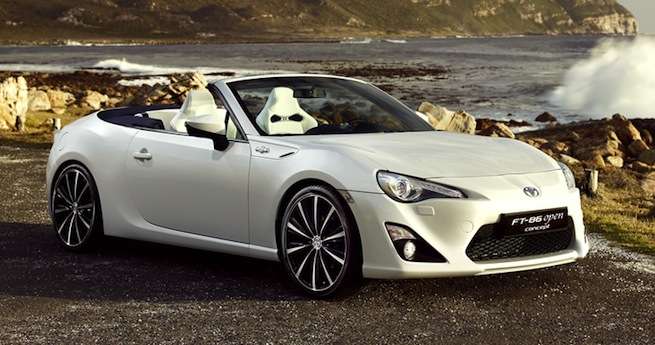 The 2015 Subaru BRZ / Scion FR-S Convertible may not make it to production because of two important reasons.
Advertisement

Toyota displayed a drop top concept version of the GT86 at the Tokyo Auto Show 2013, but Subaru could ax the project. Because of safety reasons concerning the BRZ Convertible and Subaru’s internal safety standards, the joint project may not happen anytime soon. That’s good news for Subaru buyers and bad news for BRZ/FR-S drop top fans. In an interview with Automotive News, Subaru brand chief Yasuyuki Yoshinaga told them the drop top version would likely not happen.

The FT-86 Open concept (pictured above) originally appeared at the 2013 Geneva auto show, and this year, Toyota displayed another convertible variant at the Tokyo Motor Show 2013. In spite of many requests from the U.S. market from Scion and Subaru fans for the open top version, Subaru is dragging their feet on the project.

Yoshinaga told Automotive News. “I understand well that Toyota is receiving strong requests from the American market for the car. But the biggest challenge is meeting our internal safety standards. There are big technical difficulties.” There are two major factors that will keep the convertible from making it to production anytime soon.

What makes the BRZ so attractive is the low cost

The affordable cost of the BRZ/FR-S is a big factor in how well the two-door coupe has been received around the globe. We would have likely seen a BRZ/FR-S Convertible before now, but reports from Subaru have cited many engineering obstacles that make the development of a convertible BRZ/FR-S too costly. The cars are jointly built at the Subaru Gumma factory in Japan and both automakers need to agree on the new convertible variant before anything can happen. It sounds like there is major discord between the two automakers.

Safety is paramount for Subaru

It’s one thing for Toyota to produce a concept car for an auto show, but in order for the new convertible to make it our driveways, the BRZ/FR-S wheelbase would have to be stretched and extra bracing needed to maintain rigidity and strength. But Subaru’s main concern is the internal safety standards that the Japanese automaker holds for all its vehicles.

Subaru is the only automaker in the world with the distinction of earning IIHS Top Safety Pick awards for every model it builds. That is a remarkable feat when it comes to building cars that are not only fun like the Subaru BRZ sports car, but safe as well. All of Subaru’s vehicles, including the BRZ, have received the 2013 Insurance Institute for Highway Safety (IIHS) Top Safety Pick award (TSP).

Subaru will not produce a BRZ that doesn’t meet their high safety standards. They will not sacrifice safety even if Toyota wants to move forward with the project. Yoshinaga went on to say, “We make the car, so if we don’t make it, it can’t happen. Our engineering department told me that losing the entire roof requires a complete redesign of the structure. It would need a big change.”

That’s good news for Subaru buyers, because they know they are driving the safest cars on the roads today. But it’s bad news for BRZ/FR-S fans who were hoping for a drop-top version. Don’t look for a 2015 Subaru BRZ or Scion FR-S to launch next year, or anytime soon. The cost and safety concerns will likely keep it on the drawing board and in concept form only. Stay tuned to Torque News for new developments on the BRZ convertible.

John Goreham wrote on November 26, 2013 - 8:04am Permalink
Good insight. I don't see any rollover protection on this or the FR-S except for the A pillars and windshield header. That is never enough.
Aaron Turpen wrote on November 26, 2013 - 10:36am Permalink
It'd probably have those pop-up roll pistons like the VW and such have.
Soakee wrote on November 27, 2013 - 8:06am Permalink
Rollover protection is separate from structural integrity in the event of a crash. Subaru's concern is the latter.
soakee wrote on November 27, 2013 - 8:05am Permalink
For someone who places safety way down on my list of wants/needs when buying a car, this news is extremely disconcerting. I was hoping to see the convertible FR-S/BRZ as a valid choice to replace my MX-5.
John Goreham wrote on November 27, 2013 - 10:43am Permalink
Me too! I couldn't wait so I opted for an IS 350C, which is frankly more car than I should have been able to afford. I had a 2007 MX-5 Grand Touring. However, I differ from you. I loved that my Miata had stability control (I used it often on public roads), but that it could be shut off to do smoky burnouts and donuts. I also liked that it had side head and torso airbags in case I accidentally hugged a tree. Finally, as a parent, no way would I ever own a convertible that didn't have simple rollover hoops (as my Miata did). For me, in a modern car there should not have to be a compromise between fun and safety. I hope the BRZ, FR-S convertibles make it, but I am not counting on it.