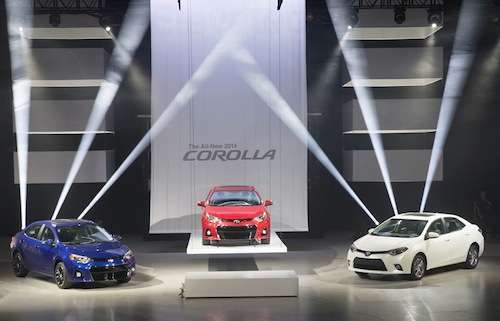 The all-new 2014 Toyota Corolla has just been unveiled and there are three facts about the new compact car that are a bit surprising. What is all the Corolla hype about?
Advertisement

The new highly-anticipated 2014 Toyota Corolla was rolled out last week with much fanfare as it was revealed before an audience of 750 guests in Santa Monica, California. The all-new 11th generation Corolla was hyped for weeks before its reveal and was elevated to new heights as it was shown for the first time in the video below. There are three surprising facts about the new compact from Toyota that tell us that this car is truly unique and worth the wait and hype.

The best-selling nameplate on the planet

The Toyota Corolla was first introduced in 1966 and with nearly 40 million cars sold around the globe in the past 47 years, the Corolla is the best-selling car nameplate on the planet. In 1997, the compact sedan surpassed the Volkswagen Beetle to take the number one spot from the recognizable German Bug. The series has undergone several major redesigns and this is the 11th. The compact sedan is a global car and is sold in 154 countries and is built in 16 locations. The Toyota Corolla’s appeal as a global car is rooted in a product philosophy set forth by Tatsuo Hasegawa, the first Corolla’s chief engineer, who sought “to develop a car that brings happiness and well-being to people around the world.”

A new level of sound insulation in the cabin

In addition to the new Corolla interior being larger and offering more rear passenger legroom, Toyota engineers went to work on the cabin and added a new level of sound-deadening material. This allows occupants optimal use of the available audio systems and connectivity features on the new-generation Corolla.

The Japanese automaker has reduced the level of environmental noise, in addition to road and engine sounds entering the cabin, by using an acoustic glass windscreen, improved floor carpet insulation, an instrument panel seal between the cowl and the windshield, a fender sound insulator, and an inner dash silencer pad. This allows occupants to better enjoy the new audio, Bluetooth hands-free phone and audio-streaming connectivity features.

The technology features have been upgraded for the new-generation Corolla and includes standard Bluetooth hands-free phone voice-command controls, audio-streaming connectivity and a range of audio capability that will offer navigation and Entune apps accessible through the head unit. It also includes eight airbags as standard safety. Other notable features on the new compact sedan are a lightweight unibody under 2,900 pounds to benefit fuel economy and three new exterior colors.

Overall, the new 2014 Corolla gets new exterior styling, a new larger upgraded interior, a new “7-speed” CVTi-S transmission, and an available Corolla ECO trim that targets 40 mpg. Much more will be shared regarding Corolla’s grade level content, capability, and pricing closer to on-sale timing this fall.