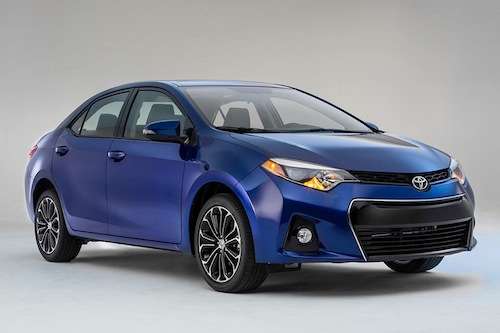 Breaking down the most hyped compact in America: 2014 Toyota Corolla

Toyota has finally revealed the 2014 Corolla, the most hyped new compact to come out in the last 10 years. We’ll break it down and see if it was worth the wait.
Advertisement

Toyota teased the all-new 2014 Toyota Corolla for the last two weeks and told us to get really excited about the new 11th generation Corolla. They hyped the new 2014 Corolla with three teaser images and told us it would be coming on June 6 and to be ready. They made us wait until 11:40 p.m. EST yesterday, and finally unveiled the highly-anticipated new compact sedan. What was all the hype about and was it really worth it?

New 2014 Corolla was unveiled with extravaganza

The all-new 2014 Corolla was enveiled last night in Santa Monica, CA with all the hype that Toyota could muster. The new compact sedan was uncovered for more than 750 people at a gala event that included chef Richard Blais, performance group Fuerza Bruta and comedian Adam Carolla. The new Corolla was lowered from the ceiling to the surprise of all the guests last night.

“Full of surprises and unexpected features, this global reveal event captured the new era and elevated experience of the redesigned Corolla,” said Bill Fay, group vice president and general manager, Toyota Division. “As our second best-selling vehicle and a familiar sight on American roadways, the new Corolla retains its trusted quality and reliability while adding an exciting new look and energy.” What did the guests see when they revealed the hyped compact?

There are four new major upgrades on the new 2014 Toyota Corolla that gives us reason to believe this new compact was really worth the hype Toyota was giving it. The new-generation compact gets new styling outside, a new larger upgraded interior, a new “7-speed” CVTi-S transmission, and an available Corolla ECO trim that targets 40 mpg. Toyota says the quality and craftsmanship of the new Corolla has been “dramatically amplified” making this the most capable Corolla yet. So what will these improvements give buyers of the new Corolla?

A newly-designed exterior and suspension

Many would argue that Toyota didn’t go far enough with the new exterior styling of the compact car. It does build on the theme first seen on the Corolla Furia Concept that debuted at the North American International Auto Show. And like most next-generation models, the new Corolla gets bigger. It is 3.90 inches longer overall, .63 inches wider and the longer wheelbase is 3.93 inches more than the current model. This should contribute to a more dynamic ride with better handling. The new Corolla also features improved suspension tuning with Macpherson struts and new rigid control-arm design. A new sporty S model will come with 17-inch wheels and sport tuning for a sportier driving experience. Overall improvements here should translate to sportier handling and an improved ride.

Like the exterior, the new 2014 Corolla cabin is bigger and gets new materials, more rear seat legroom, and greater attention to detail. It gets a new sportier image with the use of new piano-black gloss trim highlighted by metallic ornamentation and trim. New pinstripe accent colors are offered depending on the interior color theme. Rear seat occupants will feel the results of the longer wheelbase and will get 2.95-inches of additional legroom. Driver comfort has also been improved with the front seat gaining .59-inches of increased range of adjustment. Toyota says they added more sound-deadening material, and an acoustic windshield to improve cabin quietness. All four trim levels will feature new LED headlights with daytime running lights for better visibility day or night.

What makes the new 11th generation Corolla worth all the hype is Corolla’s new LE ECO model that gets an estimated EPA highway fuel economy rating of over 40 mpg. The Corolla LE ECO is a new grade that enhances the fuel economy with the help of aerodynamic underbody covers, color-keyed rear spoiler, a more efficient 1.8-liter engine with Valvematic technology, low rolling resistance tires on 15-inch wheels or available 16-inch aerodynamic alloy wheels, and an efficient new CVT.

The new Corolla offers two 1.8-liter four-cylinder engines. The base 1.8-liter powerplant with VVT-i is available on the L, LE, and S grades and is rated at 132 horsepower. The Corolla’s new ECO trim level is equipped with a 1.8-liter engine with Valvematic , a valve train technology which appears for the first time in North America on the Corolla. Valvematic offers a broader range of continuously variable valve timing to provide optimal intake valve operation relative to engine demands. Valvematic should offer more than a five-percent improvement in fuel economy and engine output (140 horsepower).

The improved fuel economy is largely due to the new Continuously Variable Transmission (CVT). The new “7-speed” CVTi-S automatic transmission (i for intelligent, S for shift), uses new shift points to maximize performance and also creates the sensation of the more conventional hydraulic automatic. On the sporty Corolla S trim, up to seven shift-points can also be manually actuated from the shift gate and steering wheel paddle shifters are offered for more driver involvement. The base model Corolla still features the old antiquated four-speed automatic or a six-speed manual gearbox. A new five-speed automatic would have been a significant improvement.

While many would say the exterior styling wasn’t “radical” enough, it gets new stylish improvements outside and a larger more upscale interior. While the new “7-speed” CVTi-S automatic is a major upgrade, a new five-speed automatic gearbox on the base model is still needed. If the new Corolla LE ECO gets over 40 mpg, the new compact’s hype is justified. We will have to wait and see what the new 2014 Toyota Corolla upgrades will cost. Overall, the all-new 2014 Toyota Corolla gets significant upgrades inside and out and looks like it was worth the wait.