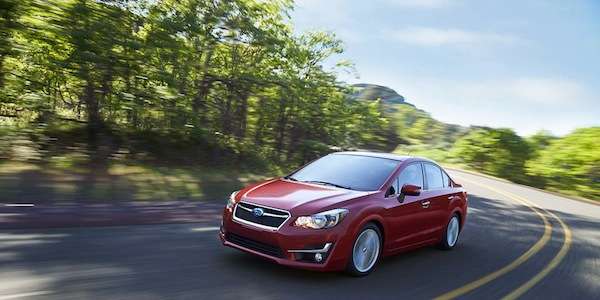 2015 Subaru XV Crosstrek and 2015 Impreza are the only cars in the entire small car category to achieve the IIHS “Superior” rating.
Advertisement

The Insurance Institute for Highway Safety (IIHS) Top safety Picks are in and Subaru tops the list with the safest vehicles in America again. The 2015 Subaru XV Crosstrek and 2015 Impreza were able to achieve what no other small car in America could. The XV crossover and the Impreza sedan and hatchback can be called the safest small cars in America because they both have achieved the “Superior” rating from the IIHS. But this is a core value for the brand and they keep pumping out safe vehicles year after year.

While other automakers hope they get a good rating, Subaru expects to get the highest safety ratings with their new vehicles. It’s nothing new for Subaru who is the only manufacturer with IIHS Top Safety Picks for all models in their lineup for six years running (2010-2015). All seven of their 2015 models; the Legacy, Outback, Forester, BRZ, WRX/STI, Impreza and XV Crosstrek, have received 2015 Top Safety Pick awards from the Insurance Institute for Highway Safety (IIHS).

This is not an easy task, but Subaru has been committed to safety since the 1960s when they began conducting their own tests long before there was any official testing being conducted. Beginning with their 2014 models, Subaru improved occupant protection in small overlap crashes by improving all of their 2014 models structurally. Subaru engineers improved the already effective ring-shaped reinforcement frame used in Subaru vehicles. This frame has been used for more than a decade now and is very effective. The IIHS results are the proof.

Subaru is planning a new standardized platform for their entire lineup to help achieve greater efficiency in development and production. Fuji Heavy Industries goal is to cut production costs by 20 percent, not only through using this new platform but also through other measures. But the main goal behind the platform is not cost reduction, but safety performance.

Safety is a core value that drives the brand in everything they do. Yasuyuki Yoshinaga, president of Subaru maker Fuji Heavy Industries. “Right now, Subaru models get top safety marks from the Insurance Institute for Highway Safety, including Top Safety Pick+, and we want to maintain that world-class safety leadership with this new platform. We want safer, more attractive vehicles.”

The all-new 2015 Subaru Impreza and 2015 XV Crosstrek are the only vehicles in the small car category that can lay claim to the IIHS’s “Superior” safety rating. Look for Subaru to continue this trend into their next generation of vehicles.