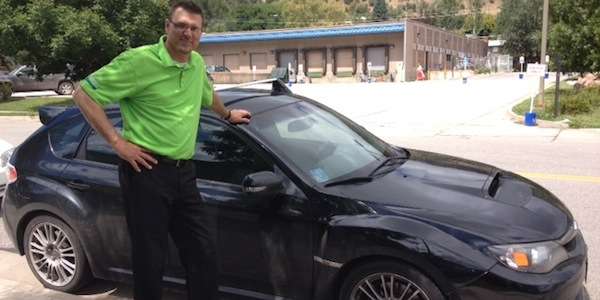 This 2009 Subaru WRX STI owner convinces his skeptical wife that this vehicle is the best in any conditions. How did he do it?
Advertisement

Chris Good and his wife Maria live near Aspen Colorado where snowfall is measured in feet not inches. Chris is an owner of a stock 2009 Subaru WRX STI and it’s the first Subaru he’s ever owned, but it won’t be his last. Chris knew just how good his STI was in the snow, but Maria wasn’t so sure until he gave her a ride home in a snowstorm where many would fear to venture out. I interviewed Chris to get his story of what happened this past winter.

Chris has always been a gear head and loved anything “fast enough to do something stupid in or on.” But he has learned that Subaru does something much different with their performance STI and builds in extra bonuses of safety and reliability. He knows this sports car won’t leave him stranded in the snow and he doesn’t have to leave it home in the garage when conditions get extreme. Maybe this is why STI fans are so passionate about their cars. They know their cars will take care of them when other cars would let them down. Let’s let Chris tell us what happened this past winter.

“This last winter, my wife called me from Aspen telling me that the snowstorm had made it impossible for her to drive her Kia Optima to work. Maria had taken the bus, and wasn’t looking forward to the very long bus ride home in the snow. Immediately, I offered to drive to Aspen to get her, to which she replied…”really???” She didn’t know that I look for any excuse to take my STI out for a fun ride in the deep snow.”

Chris continues, “It had been snowing non-stop since the night before and the snow was piling up on the roads. I knew Highway 82 heading to Aspen was going be a blast in my STI…the road was all but deserted, and I had a new set of Dunlop Wintermax tires. I was able to do the 55-65 speed limit all the way there, only slowing down long enough to let the slower drivers I was passing know I was there. For the STI with snow tires, this was almost like driving on a dirt road. I really had that much grip.”

“We left Aspen, and were passing cars that were going 30-35 mph (very carefully, doing the speed limit), and she turned to me and said “Wow, these Subarus really do good in the snow”. I said, “Yep.” (then began to explain WHY the Subaru AWD system works so well. But she clearly only cared that it worked, not why, so I stopped talking at “yep”).”

Maria gets her own Subaru

After that storied ride home, Maria was thoroughly impressed with her husband’s STI, and soon after they bought another Subaru. After her Kia Optima lease was up in April, it was time to shop for a new car. There was no doubt that she wanted a Subaru. After checking out a new Legacy sedan which she “liked”, she spotted a Tungsten 2014 Outback and fell in love. Maria now drives an Outback wagon and won’t be taking the bus anymore to work in Aspen this winter when it snows.

Chris nows feels confident when his wife takes off for the drive up Highway 82 to Aspen. And he even gets to drive it on days off for outdoor excursions when they need extra cargo room. Chris says, “I feel good about her driving it to Aspen from Glenwood for work because I don’t believe she could be in a safer or more reliable car (especially for our climate). It works great for us, and I actually like driving it too. We use it on our days off together when we need the extra space for our dog Bear or fly fishing gear, and it handles the pass roads great (even for a guy who prefers his 305hp STI).”

The performance 2009 Subaru WRX STI was the first Subaru Chris had ever owned, but it’s not the last for this family. Chris and Maria are sold on Subaru’s extra bonuses of safety, reliability and ease of mind with the excellent Symmetrical all-wheel drive that comes standard.