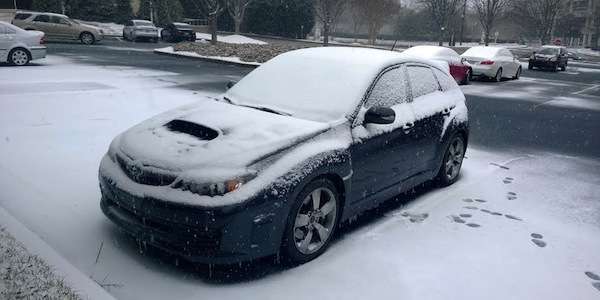 An exclusive Torque News interview with a 2008 Subaru WRX STI owner who used his STI in severe weather. Watch as he pulls out a stuck BMW.
Advertisement

Vahagen lives in Georgia where you wouldn’t think he would need an all-wheel drive Subaru. But the BMW owner in the video below who got stuck, was happy Vahagen owned a 2008 Subaru WRX STI with its Symmetrical all-wheel-drive system. The area had received lots of rain and there were leaves covering the ground. The Georgia parking area turned into a slick mess that Vahagen said, “felt like driving on ice.”

The ground was super slick and the BMW and other cars had tried to get out of the parking area. This BMW slid back into a low area and was stuck good. He parked on high ground and thought he had parked in a secure place, but the rear drive German sports coupe could not move an inch.

This 2008 STI had worn summer tires

Vahagen told us he had Dunlop 600 HP Sport summer tires on his 2008 STI at the time, and there was very little tread left on them. But even with worn summer tires, the performance Subaru was able to move around and get in position to hook up a tow rope to the BMW. Vahagen popped the clutch and was able to yank the stuck BMW out of the wet muddy area so he could leave.

But this wasn’t the only time Vahagen was thankful he owned this 2008 WRX STI. Back in February, this Georgian was in severe weather when a snow storm hit the southern U.S. That recent polar vortex proved that you need not necessarily be in the Northern Snow Belt states to get snowed in. Vahagen was one of the only cars moving on that day where there were snowy and icy treacherous roads.

The Subaru made it home when most others couldn’t

It took Vahagen 6 hours to go 5 miles that snowy day in February, but most cars were stuck and could not move. Vahagen was one of the few people who made it home that night as many slept in their cars because they were stranded in the unusual weather that hit the region. The police were telling people to park and walk home. But Vahagen knew what his STI could do. He told the officer he could make it, and the officer just smirked and said, “sure, give it a try.” This 2008 Subaru had no problem and got its owner home when many had to spend the night in a motel room or slept in their cars.

Vahagen’s love for Subaru started with a 2002 Impreza 2.5 RS bugeye that he says, “I fell in love with.” Vahagen went on to buy the 2008 WRX STI and has since sold the performance car and bought a new 2014 Subaru Impreza Sport 5-door hatchback. Vahagen says, he “likes the hatch versatility, the suspension is excellent, and it has a comfortable yet firm ride.”

The Georgian is sold on Subaru cars because they give him confidence in all driving situations wet or dry. You wouldn’t think someone living in the south would need an all-wheel-drive vehicle, but Vahagen is sure happy he owns a Subaru. Watch the video below where he uses his 2008 Subaru WRX STI to pull out a stuck BMW from the mud.

Thanks to Vahagen for allowing us to tell his story in this exclusive Torque News interview.