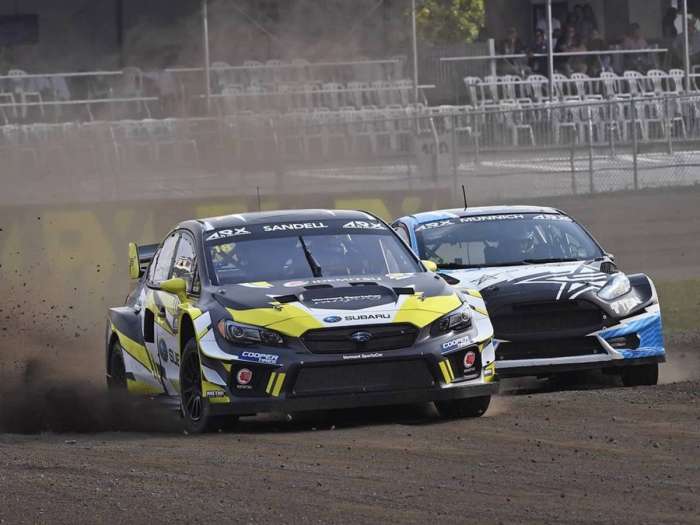 Subaru WRX STI Makes Progress, Fails To Get On the Podium

Subaru Rally Team USA brought a new driver and three cars to the Americas Rallycross round three at Trois Rivieres in Canada. The team made progress but they failed to make the podium again. It was Scott Speed and Tanner Foust in the Volkswagen Beetles who were at the top after the dust settled.

Jacques Villenueve stepped into the #12 Subaru WRX STI for the first time and had a good first start for Subaru. He got accustomed to the new supercar and improved throughout the weekend, but failed to make the Final.

Chris Atkinson had the fastest car for Subaru this weekend and started on the front row in the Semi-final A on day 2. Atkinson took the holeshot but lost position to the faster Scott Speed and Tanner Foust. Atkinson finished in third place qualifying for the third row in the Final.

Teammate Patrik Sandell started the Semi-final B in row two alongside Villeneuve with Ken Block and Steve Arpin in row one. Sandell in the #18 Subaru WRX STI ran a smart race and passed Arpin on the Joker lap to move into second place for the finish.

For the Final, Sandell was in good position in row two alongside Tanner Foust, with Atkinson behind him in row three. Scott Speed in the VW Beetle and Ken Block in the Ford Focus RS were in the front row. Sandell ran a good race but Foust passed him right out of the gate and could not catch the leaders. Sandell finished fourth behind, Speed, Foust and Block who rounded out the podium.

Subaru has improved throughout the year, but has yet to get on the podium so far this season. The Rallycross team gets three 2018 Subaru WRX STI Supercars ready for the Nitro World Games on September 22-23 outside of Salt Lake City, Utah which will quickly be followed by the final round of the 2018 ARX season on September 29-30 in Austin, Texas.