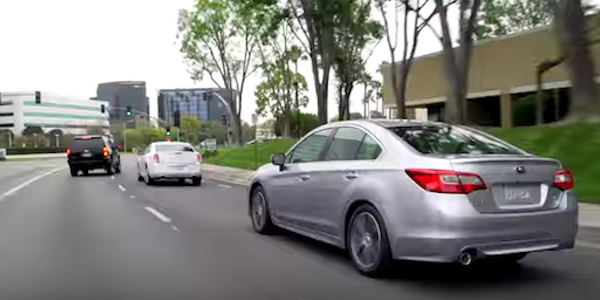 Subaru is known for their top safety ratings. Why will all Subarus be safer by 2022?
Advertisement

Subaru says they want to be the global safety leader. Now all their vehicles will be safer because of an agreement they signed with other global automakers. Consumers will benefit by the new Automatic Emergency Braking (AEB) agreement Subaru signed with 20 other global automakers. AEB will be standard on nearly all new models sold in the U.S. by 2022.

How will consumers benefit?

Recent research by the Insurance Institute for Highway Safety (IIHS), shows AEB systems would reduce rear-end crashes by 40 percent. IIHS estimates by 2025, the earliest the National Highway Transportation Safety Administration believes it could realistically implement a regulatory requirement for AEB, having ABS as a standard feature will prevent 28,000 crashes and 12,000 injuries.

Subaru, known for safety in all their vehicles, accepted the challenge and pledged to meet this goal three years in advance. Subaru already offers the technology on nearly all Subaru models as optional equipment. The 2016 Subaru Legacy, Outback, Forester, Impreza, WRX and Crosstrek are all available with EyeSight Driver Assist Technology.

Currently, Subaru’s 2016 models equipped with EyeSight, earned the 2016 IIHS Top Safety Pick+ award. These vehicles are six of only 54 that took home the award by receiving the highest possible rating in all five crashworthiness evaluations and achieved a “Superior” rating for front crash prevention. Starting in 2022, all new Subaru Forester, Outback, Crosstrek, Impreza, WRX, WRX STI, Legacy and BRZ vehicles will come standard with EyeSight. Their new 3-Row Crossover coming in 2018 will also come with this technology.

Dana wrote on March 21, 2016 - 12:42pm Permalink
No mention of other companies agreeing to this as well? Are all the major US sellers in on this?