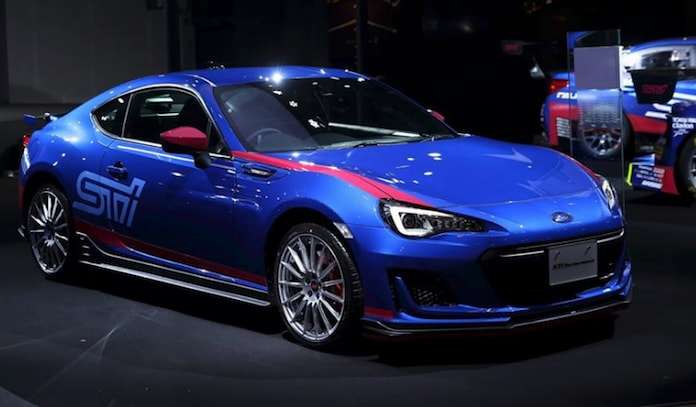 Subaru teases another BRZ STI model at the Tokyo Auto Salon. What’s next for BRZ?
Advertisement

With all the attention on the Subaru VIZIV Performance STI Concept at Tokyo Auto Salon, the BRZ STI Performance model got lost in all the media hype. But Subaru hasn’t forgotten about the sports coupe that needs a remodel. Performance upgrades from their motorsports partner, Subaru Tecnica International (STI) wouldn’t hurt either.

Subaru didn’t say much about the BRZ STI Sport -STI Performance model they brought to Tokyo, but they give performance enthusiasts an idea of what could happen with STI-enhancements. Of course, fans want more than just a few STI tweaks. They want a more powerful boxer engine and other STI performance upgrades like the new Limited Edition 2018 BRZ tS (tuned by STI) coming early this year. 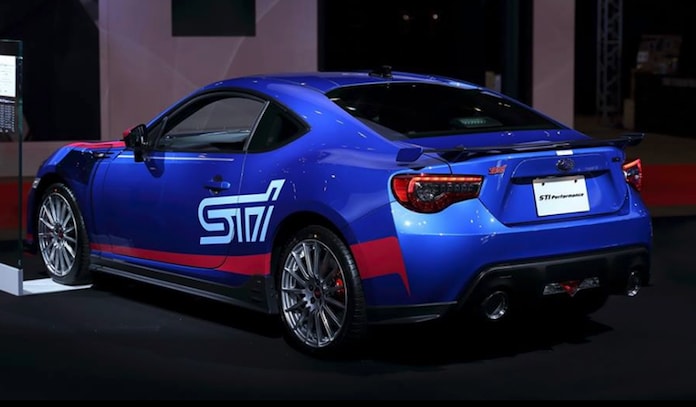 It’s coming this year, and only a few fans will be able to get one (limited to 500 units). BRZ tS gets STI-tuned front and rear Sachs dampers and coil springs, and flexible V-braces in the engine compartment. New draw stiffeners are added to the chassis and sub-frame to improve steering response.

Performance fans will also see a new commemorative 50th anniversary 2018 BRZ next month. This model will feature the new special edition Heritage Blue color and will be based on their top Limited trim with special badging. Inside, BRZ will feature black leather upholstery, silver stitching, silver seat belts, and special embroidered logos.

Subaru WRX/STI and BRZ anniversary editions will be limited to 1050 examples. 2018 Subaru WRX, WRX STI and BRZ sport coupe will get 1050 total examples for the performance line. BRZ will only get 250 Limited models in the special 50th anniversary trim.

After these models arrive this year, BRZ is due for a complete remodel. Subaru needs to update the 2.0-liter boxer internals with STI upgrades like they did the Subaru WRX STI Type RA. It wasn’t a huge bump in power, but it received other tweaks to improve overall performance. For now, fans get the Limited Edition BRZ tS and 50th anniversary models before BRZ gets an overhaul.

The Subaru BRZ sports coupe is still the best sports coupe for the money, and it’s getting a complete remodel. Subaru has confirmed BRZ will see a second-generation model along with it’s twin, Toyota 86. The remodel will come in 2020 and it will be the next-to-last Subaru model to get the new Subaru Global Platform. Will fans get a turbocharged 2.0-liter boxer engine in the sports coupe? Don't bet on it. But it will likely get more STI upgrades.