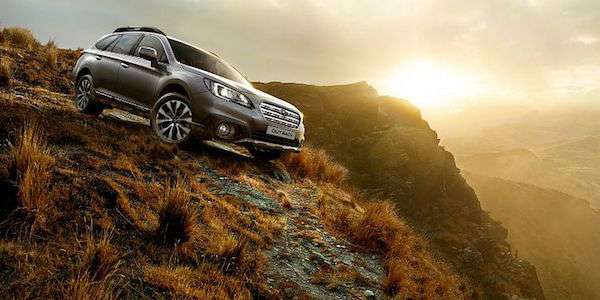 The 2016 Subaru Outback gets another global award. Why did the Russians name it the best Large Crossover?
Advertisement

You don’t think of the 2016 Subaru Outback as being a large vehicle, but it is according to the Russians. The Outback was recognized as the best “Large Crossover” in the most prestigious automotive awards in Russia. It wins not because it’s large. It gets the award because it’s a vehicle that will handle extreme conditions.

Outback wins the popular vote from readers of the "At the wheel” Grand Prix magazine in Russia. More than 20,000 readers of the Russian magazine chose the best of the best winners. The Subaru wagon received the largest number of votes and was chosen the best for its “outstanding technical characteristics.” Those technical characteristics would include the vehicle’s Boxer engine, its all-wheel-drive system, X Mode off-road system and its safety features.

The honor was received by General Director of Subaru Motor Yoshiko Kishimoto who said, "For us it is an honor to receive the Grand Prix “at the wheel” because the winners are selected by readers themselves. In the end, this is the philosophy of Subaru and the goal of our work, to create vehicles that meet people's expectations. First and foremost, we want to say thank you to the people who produce our car, the Subaru engineers. And, of course, thank you very much for every vote that was cast for the Subaru Outback! Your recognition inspires us to become better.”

It’s those same engineers that designed the Outback to be more than a grocery hauler. The wagon has a “go-anywhere” attitude and it will handle some extreme conditions in Russia where the environment can be tough on a vehicle. Even though the new Outback is refined inside, it’s seen some extreme duty and set a world record in Russia.

The new-generation Subaru Outback set the fastest road-rallying Guinness world record in Russia in 2014. The all-wheel-drive wagon set the Guinness record by making the fastest rally at a distance of more than 10,000 kilometers (6,213 miles) in a production car. The crew managed to overcome a distance of 16,000 kilometers in just 7 days and 12 hours. Crew members Andrei Leontiev and Anna Zavershinskaya were behind the wheel.

The 2016 Subaru Outback has received numerous awards around the globe in the past year and picks up another one in Russia. It’s not a large vehicle, but it wins the best “Large Crossover” in the most prestigious automotive awards in Russia. It wins because it’s a vehicle that will handle extreme conditions.