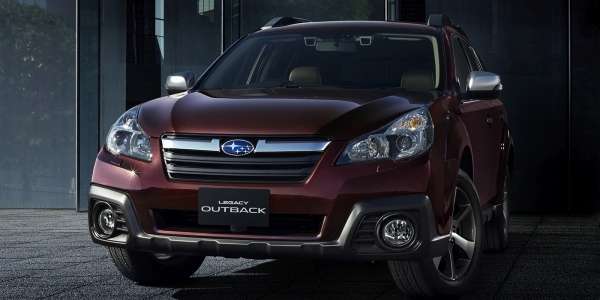 Subaru has just announced a new special edition 2014 “Grand Master” Outback that will launch in Japan next year.
Advertisement

Subaru is rolling out a number of new vehicles, but the new 2014 “Grand Master” Outback is more upscale than anything they’ve launched before. Only Subaru would call the new “Grand Master” Outback their flagship model. This identifies perfectly who they are. The Japanese automaker knows who their target market is, and they make no apologies for it. They know their market is multi-use vehicles and they won’t be changing from their core values.

The new 2014 “Grand Master” Outback is a good example of this and they call it their “flagship of the Subaru brand.” And this model is more upscale than anything we’ve seen from the brand before. It comes with special treatments and equipment in the interior and exterior. Subaru will launch the premium car starting in Japan February 27, 2014.

The new Outback Grand Master will be loaded with all the extra equipment like the 3.6-liter six-cylinder engine and the new generation 3.6R EyeSight safety system. Subaru wants the occupants of the new Grand Master to feel extra comfortable. Outside, the new Outback flagship example gets a rich brown exterior color that sets it apart.

The exterior also features a number of unique treatments that are exclusive to the special edition Outback. Up front, the grille gets a special dark-like treatment, 17 inch alloy wheels finished in gun metallic with glitter cutting, exclusive side sill cladding, satin-plated door mirrors, large private roof rails and HID low beam headlights in a black bezel.

The all-new special edition 2014 “Grand Master” Outback is more upscale than anything Subaru has launched before. It will also be exclusive and the Japanese automaker will limit production to 30 units a month. For now, this new upscale Outback will only be available in the Japan market. Maybe we’ll see it in the U.S., UK and Europe later next year. Subaru will launch the premium Outback wagon starting in Japan February 27, 2014.