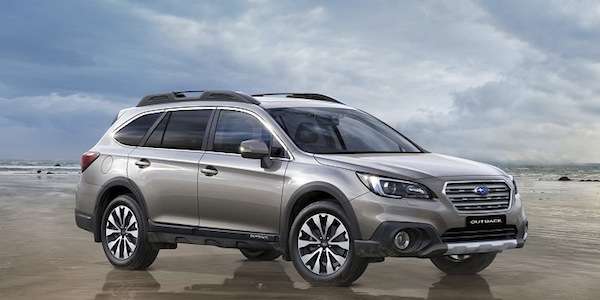 Subaru’s new generation 2015 Outback has established a new sales record in Australia and Tasmania. Why did Subaru listen to the Australian market first?
Advertisement

If Subaru was going to produce the best ever off-road Subaru Outback, they needed to start in Australia where the conditions are severe. The Outback wagon is synonymous with the vast, remote, and arid outback regions in Australia, and the name is intended to emphasize the off-road capability of the vehicle. It’s the best place on the planet to test any of Subaru’s all-wheel drive vehicles.

Subaru succeeded by producing an Outback that suites the tough Australian environment. The redesigned 2015 Subaru Outback has just been launched in Australia and on the island of Tasmania and buyers like what Subaru has done to the all-wheel-drive wagon. Subaru reports the new-generation wagon has established a new monthly sales record in Australia. 890 Outbacks were sold in February breaking its previous record of 829, from March 2006. The February figure is an impressive 261.8 percent ahead of the same month last year.

DON’T MISS: Is the 2015 Subaru Outback getting too soft?

Even though the Japanese automaker sells many more Outbacks in the U.S. than in Australia, Subaru knew that meeting the market needs for the extreme conditions in Australia, would help them produce an Outback worthy of all global markets. Nick Senior, Managing Director, Subaru Australia, said Subaru “looked at, and listened to, the Australian market.” Subaru engineers went back to Japan and developed an Outback that is designed for Australian conditions, lifestyle and tastes.

Outback is a big hit on Tasmania

On the island of Tasmania, Outback is ideal for the Tasmanian roads, where there are miles of unsealed surfaces and long rural stretches of highway. Subaru’s new generation 2015 Outback has also captured Tasmanian hearts, becoming the best-seller in its segment in February, according to official VFACTS sales figures. Tasmania has been a good market for Subaru’s all-wheel-drive vehicles and the new generation 2015 Subaru Outback wagon is a big hit on the island as well. Subaru has a long history in Australia and knew there wouldn’t be a better place on the planet to start when they redesigned the Outback wagon.