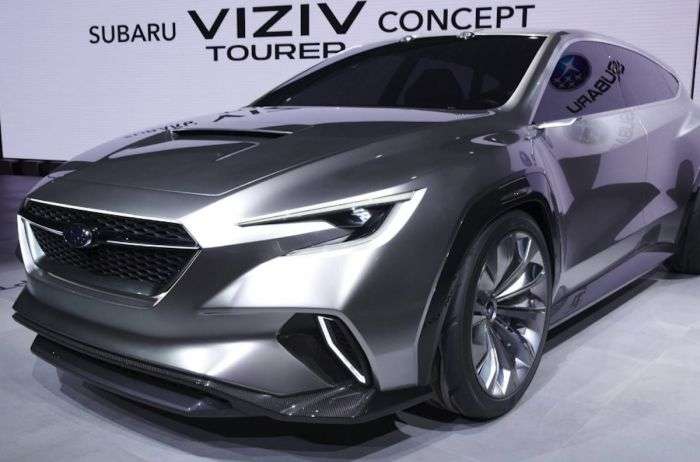 Subaru unveiled the future Subaru WRX/STI 5-Door Hatch with EyeSight. Will Subaru ax the 6-speed manual gearbox in the pursuit of safety?
Advertisement

Subaru Corp uncovered the VIZIV Tourer Concept at the Geneva International Motor Show yesterday. It will likely be the forerunner of the next-generation Subaru WRX/STI hatchback fans have been asking for since Subaru dropped the 5-Door in 2015. It won’t make its dealer launch until sometime in 2020, but it’s likely coming back. In Subaru’s pursuit of safety, are there even more changes coming to the STI?

The new-generation 2020 WRX STI Hatch likely won’t see radical design changes like the aggressive concept wagon they unveiled in Geneva. All auto manufacturers bring wild-looking concepts to the shows to get media attention, but the actual production cars usually end up looking very different. So don’t be too disappointed if the fourth-generation 2020 Subaru WRX STI doesn’t look like the concept car Subaru brought to the 88th Geneva International Motor Show.

Other big changes could be coming

There are rumors floating around, Subaru could ax the manual gearbox so they can build the world’s safest cars. In a recent report by Auto Express, it could be coming to the STI. Subaru engineers haven’t been able to mate their EyeSight driver assist technology with a manual gearbox. Subaru announced the VIZIV Tourer Concept features their advanced safety features in this future wagon. It gets a suite of safety tech including the next-generation EyeSight system and deployment of automated driving technologies and advanced driver-assist functions.

Currently, the 6-speed manual gearbox won’t work with EyeSight. When Subaru uncovered the VIZIV Performance Concept at the Tokyo Motor Show last year they said, “Subaru continues to pursue ultimate levels of safety in the aim of eliminating automobile accidents.” We suspect the next-generation WRX/STI may not have a manual gearbox but only be offered with an upgraded performance version of their WRX Sport Lineartronic CVT.

There’s also the agreement Subaru signed with 20 other global automakers in 2016. It says Automatic Emergency Braking (AEB) will be standard on nearly all new models sold in the U.S. by 2022. The next-generation Subaru STI will fall victim to this too.

Look for Subaru to launch the next-generation Subaru WRX/STI around 2020 with a high-performance boxer engine and Symmetrical all-wheel-drive in a 5-Door Hatch body style. They may also drop the manual gearbox in the pursuit of building the world’s safest cars.

Big Engines wrote on March 13, 2018 - 6:56am Permalink
WRX/STI with CVT!!! not too good for everyone mostly CVT maybe will be good offer for WRX only but WRX STI? i don't think so, i wish they use DCT (dual-clutch transmission) better from CVT, i think most STI owners will modified their cars and CVT will not hold for much power and torque