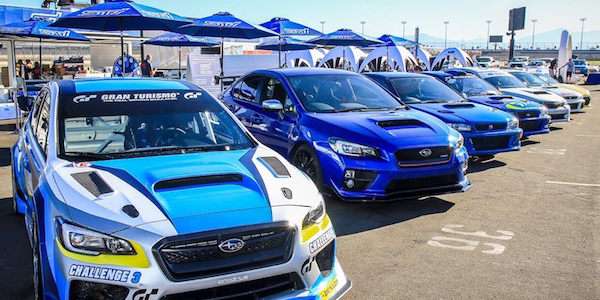 Subaru Brought an Exclusive WRX STI Showcase to Subiefest, One STI was a Big Fan Favorite

Subaru brings an exclusive WRX STI Showcase to Subiefest, the largest gathering of Subaru fans in North America. What WRX STI was the biggest hit?
Advertisement

Subaru Tecnica International (STI), Subaru’s motorsports partner, brought an exclusive vehicle showcase for the fans at this year's Subiefest. Running for its 11th consecutive year, Subiefest returned for the third year in a row to the Auto Club Speedway, a multi-million dollar facility, in Fontana, CA. What STI was the biggest hit with fans?

Subaru’s 2016 Isle of Man TT Challenge 3 WRX STI Time Attack car shattered the car lap record earlier this year.. Mark Higgins took the modified WRX STI on the first of four scheduled attempts and blew away the record the first time out. How fast was it?

VICE was also on hand to entertain at Subiefest. Named one of “America’s Best DJs,” the LA native performed on stage for the fans. He’s performed at some of the hottest clubs across the country, performing for sold-out audiences in major cities so it was quite a treat for Subiefest attendees. VICE says, “I’m that person who always pictures myself in the crowd. I’m not just the one standing and playing for everyone. As I approach each song I think, ‘How would I want this record played?’ And then I put my own unique spin on it.”

Subaru, STI and VICE put on quite a show at Subiefest 2016 in Fontana, CA. Subaru’s 2016 WRX STI Time Attack drew a lot of attention from performance fans and was the biggest hit of the show.