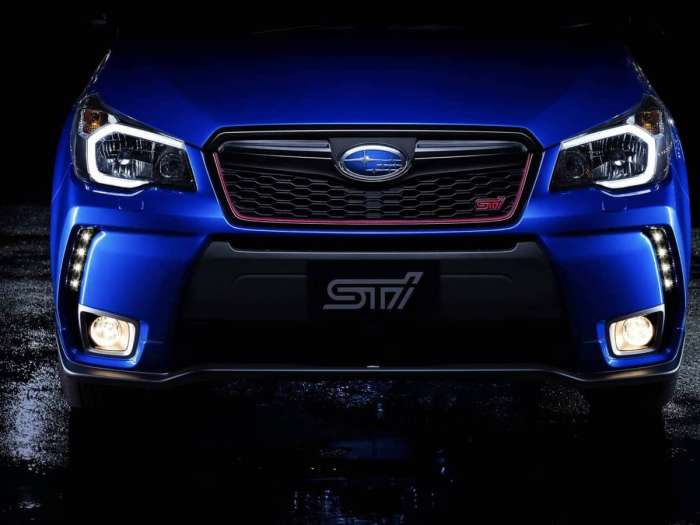 Subaru Boss Says Hotter Forester STI is Not In the Plans

Performance fans won’t be getting a new Forester STI. According to a Subaru Executive, it’s not in Subaru’s plans for the foreseeable future.
Advertisement

When Subaru Corp discontinued the hotter Forester 2.0XT turbo model with 250 horsepower, if we said performance fans were disappointed, it would be an understatement. Forester XT was the next best thing to having a Forester STI version of the small SUV and it was a fun performance SUV in the Subaru lineup.

But the all-new fifth-generation 2019 Forester only comes with the standard 2.5-liter naturally aspirated boxer engine producing 182 hp and 176 lb-ft of torque. It just doesn’t excite Forester enthusiasts. And the new 2019 Forester Sport trim isn’t much more than an appearance package.

Subaru Australia managing director Colin Christie told The Motor Report at the launch event of the all-new 2019 Subaru Forester SUV, that a hotter version of the small SUV is not likely going to happen. Christie said, “We’re very specific about how STI gets branded so it has to have performance improvements and a whole list of things before we’d even consider putting the STI moniker on it.”

Why did Subaru Corp dump the Forester 2.0XT?

According to Subaru, only 5 percent of buyers were opting for the turbo model, so it was not a profitable model to keep building. Subaru Corp decided to also ax the 6-speed manual gearbox for the same reason; slow sales.

Christie went on to say, “So no, unless there was a turbo version of the Forester in the future there wouldn’t be an STI version of that car. The tS (Tuned by STI) is a slightly different version of that still with special tuning.”

Subaru first introduced a sporty turbocharged Forester trim to the already fun lineup in 2004, the same year the WRX STI was offered in the U.S. market. It’s been a long run for the Forester turbo model, but it’s likely gone forever.

Subaru thinks they can attract a bigger audience with the new base fifth-generation 2019 Forester that rides on a new Global Platform and they don’t need a hotter version. “The XT was a great car but sometimes for growing our audience base having a simpler lineup has its benefits, and it isn’t such a complex message," Christie added.

Pete B wrote on September 10, 2018 - 8:46am Permalink
Make the Turbo! Make it AVAILABLE at the dealerships. Market it. It will sell. Sell Well. Develop the new more powerful and competitive WRX And Sti and then develop the new hotter XT or rename it Forester STI. I will be patient. My 17 XT is totally awesome and still basically brand new!
Julie wrote on September 10, 2018 - 8:53pm Permalink
The manual and XT sold poorly separately. I wonder if sales would've improved had they offered the XT in a manual.
Marcus wrote on September 12, 2018 - 4:50am Permalink
I own a 2008 XT manual (and still love it). They axed the manual XT for the 2009 and up generations of the Forester.
Rich wrote on September 10, 2018 - 11:46pm Permalink
I bet if they made a limited edition special order only Forester ts with the turbo, 6 speed and uprated suspension and brakes it would sell like hotcakes. People would lineup and order it if they knew they would only be shipping a few to each dealer. Probably could charge STI money or more and people would gladly pay.
Ed B wrote on September 11, 2018 - 9:32am Permalink
Folks, I'm an enthusiast too and love the passion from XT owners. The truth is Subaru has decided to make cars for the masses and management seems to care less about enthusiasts and make it pretty clear in their statements as to the demise of the XT. I'll keep my 2017 XT as long as I can and move on at that point. Subaru has lost its way in a sea of mediocre offerings. No one can argue their sales success and unless the 2019 Forester sales projections fall really short, we'll get more of the same in the future. Gone are the days of fun and quirkiness at Subaru. Perhaps the turbo lives on in the 2020 Outback and Legacy, neither of which appeal to me. Moving forward, if I stay in the carline, the Ascent is my only option. I will test drive in the coming year and see where I go from there. They could of at least put sport modes in the Ascent versus making it pretty similar to most family haulers. Again - appealing to the masses and playing it safe - neither of which got them to the status they are today.
Ed B wrote on September 12, 2018 - 5:24pm Permalink
Folks, it's not going to happen. Subaru management seems adamant and almost defiant in their rational for ditching the XT. Unfortunately, if your a true enthusiast, you've have to go elsewhere in the CUV segment if horsepower is a priority.
Rhys Talbot wrote on September 23, 2018 - 12:02am Permalink
I have a 2017 XT. It is the best new car I have ever had. The paddle shifters are awesome. Subaru is blowing it to drop the 2.0 but now mine will be worth more in the next few years.