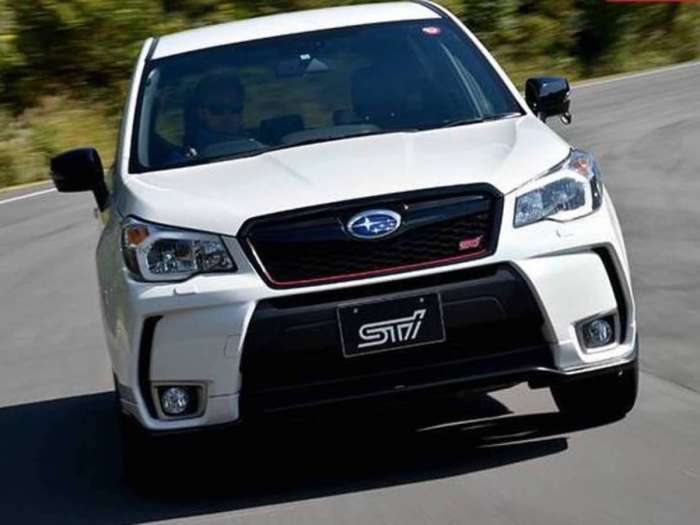 Subaru axed the sporty 2.0XT model when they redesigned the all-new fifth-generation 2019 Forester and fans aren’t happy. Fans want a Forester with more than the newly-redesigned 2019 Forester’s 2.5-liter naturally-aspirated Boxer producing 182 hp and 176 lb-ft of torque. It just doesn’t excite Forester enthusiasts. And the new 2019 Forester Sport trim isn’t much more than an appearance package.

Subaru Corp announced at the New York International Auto Show in 2015, they would bring more Subaru Technica International (STI) enhanced models to the US. So where is the Forester STI? Subaru already offered a Forester tS (tuned by STI) in Australia, and it was a huge success when was offered down under. Subaru only built 300 examples for the Australian market and they were snatched up quickly.

The Forester tS was powered by the standard 2.0XT turbo boxer and had special equipment underneath that was developed at the Nurburgring alongside the WRX STI S207. The performance SUV sat 15mm lower than the regular model and came with a special track-tested STI-tuned suspension setup and tuning for performance driving dynamics. Underneath it featured 19-in BBS aluminum wheels wrapped in 245/45R19 performance tires, 17-in ventilated Brembo disc brakes both front and rear with red STI logo.

When it launched in Australia in 2016, Subaru Australia Managing Director, Nick Senior, said: “When we flagged Forester tS late last year, the customer inquiries went through the roof and the end result is we’re already wishing we’d ordered more.” Now Subaru and STI need to jointly develop a new fifth-generation Forester like the performance Australian Forester tS. Senior went on to say, “It certainly gives us great confidence in progressing other joint projects between the factory and STI.”

We already know there’s great fan interest in a performance-oriented Forester SUV. Now Subaru Corporation needs to make a call to Subaru Technica International and let them know they need a left-hand drive 2020 Limited Edition Forester STI for the North American market. Will Subaru give Fozzy fans something to get excited about? Stay tuned.

Pete Benjamin wrote on August 20, 2018 - 7:44am Permalink
Yes. Please. With 350 plus hp and 0-60 times good enough to make to make Porche take notice ( they make 375hp with their boxer four found in the Cayman, Boxer and Macann) combined with Subaru’s already Superior off road ability for 40k. This ride will be a Legend and highly sought after “if available”. It would be like a 1964 Mustang for the brand. I would certainly spend my money. A halo SUV.
Digital Doc wrote on August 20, 2018 - 5:38pm Permalink
Finalmente! Yes, please, a Forseter that performance fans can get behind. I seriously don't need 300+ hp, just 225 to 250 hp so I can get on the highway without worrying if the ponies will be there when I need them. Oh, and ditto for the Crosstrek!
Brandon Allen wrote on August 20, 2018 - 8:25pm Permalink
They'd sell more crosstrek STIs IMO. The forester got huge, great for family but the Crosstrek is the right size for both an XT and STI variant. Dare I say a Crosstrek XT could outsell the WRX if priced right. Looks awesome, nice hatch but way better 4 season car. Forester XT stopped selling when the Forester got too big, people just wanted the size.
Greg wrote on August 20, 2018 - 8:55pm Permalink
Please offer the 6spd also. Most of us really hate CVT’s.
Spencer Crona wrote on May 10, 2019 - 9:03pm Permalink
Absolutely. Hate. CVTs. Would trade WRX for 6-spd manual STI Forester or Crosstrek in a heartbeat. Likely will never happen because low take rate on manuals, wanh wanh go the babies, they're too hard to drive (especially for the vast proportion of drivers for whom attending to driving, let alone shifting, is almost an afterthought, lower priority activity to simultaneous texting, makeup, snarfing fast food, shaving, changing underwear, etc.). So people who drive with actual attention & enjoyment jobbed again. Prefer manual safety, control even in heavy traffic, so makes me a dinosaur for ability to use left leg. Hang up and drive, please, and maybe Subaru will reconsider.
John Zampier wrote on August 20, 2018 - 8:55pm Permalink
F it. Make an STI version of every Subaru model, but especially the Forester.
Ed B wrote on August 20, 2018 - 9:23pm Permalink
Folks, don’t hold your breathe. Subaru knew they would get push back once they ditched the turbo and pressed ahead regardless, How difficult would it really have been to keep the XT and simply use the new Ascent engine (regular gas) and same global platform they intended for the Forester any way? Performance, power and safety. Again, it was a cost cutting move. As Denis noted, the Sport is simply a cosmetic appearance package. No thanks, I’ll keep my 2017 XT.
Kevin Andrew Vagen wrote on August 21, 2018 - 7:06am Permalink
More than a turbocharged trim, the United States needs MANUAL transmissions. Peak power is secondary to power delivery. Such a shame that our 2016 Premium is the end of an era!
THW wrote on August 22, 2018 - 12:44am Permalink
Buy the 2018 Forester XT while they're still available. We did and we definitely do not regret the decision.
mike wrote on September 4, 2018 - 2:07pm Permalink
Subaru need to get rid of the CVT.please on the xt and impreza
Wilson M wrote on September 6, 2018 - 8:52am Permalink
As someone who's mildly modded their '16 XT, I 100% agree. Don't need much power (270-ish and I'd be happy), but the transmission is the biggest weakness if you want to do any "spirited driving", second to thermals. Trans/Engine temp has always been an issue on the track, and probably also why the tow rating is garbage. I have a trans cooler, but the front end could still do with more airflow.
Joseph Winslett wrote on October 14, 2018 - 8:27am Permalink
Pls add to email list