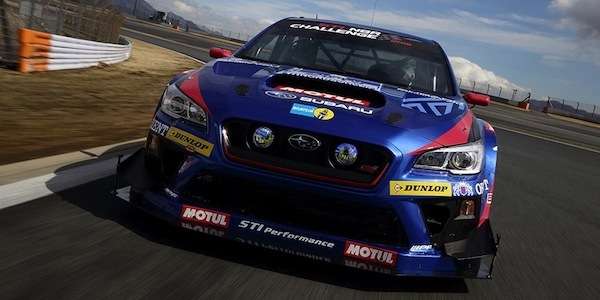 The STI team gathered at Fuji Speedway for a press day and a shakedown of the 2015 Subaru WRX STI Nurburgring 24-hour race car.
Advertisement

Last year, the 2015 Subaru WRX STI NBR race car was doing its shakedown at the Subaru test track near Gunma. This year the STI brought the newly developed 2015 STI to Fuji Speedway to show the car off for the press. Driver Kota Sasaki drove the car at the event and this will be his fifth running of the STI at the Nurburgring 24-hour race in May.

Sasaki knows this car and said the new 2015 WRX STI NBR Challenge car feels the chassis is more rigid and that the turning is quicker than last year’s car. The driver was quick to praise the new aerodynamic enhancements that STI has been working on in the wind tunnel at Fuji Heavy Industries test facility. Sasaki says, “The downforce on the front end of the car has worked well, and I would like to run early this year at Nurburgring to show the fans what this car is able to do.”

STI was disappointed in the fourth place finish at last year’s running of the Nurburgring 24-hour race in the SP3T class. They started the development of this new 2015 STI back in July of last year with the goal of winning again in their 8th year of running the Nurburgring 24-hr race. STI president Yoshio Hirakawa, told the press that there are noticeable changes made to the new 2015 STI this year. He said the durability of the Subaru WRX STI and performance of the engine was never the issue and the changes made had to do with the non performance aerodynamics.

Tatsumi Eiji, STI general manager who led the development of the vehicle in Subaru’s victory in 2012, said they analyzed the results from last year and will make many changes. They made changes to the layout of the car and it will receive new paddle shifters, a stiffer chassis, new aerodynamics, a left handed drive configuration to improve visibility and changes for better efficiency in the pits.

The new 2015 Subaru WRX STI NBR race car will depart for its transport to Germany for the final shakedown in mid March. Final setup of the cars takes place at the Nurburgring on April 11-12, and qualifying will be on Saturday, April 25. STI is hoping the changes made to WRX STI NBR will bring victory in May. Stay tuned.