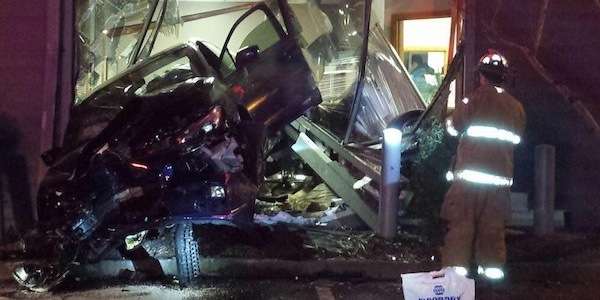 Driver and passenger unhurt after 2015 Subaru WRX crashes through building

A 2015 Subaru WRX destroys concrete barriers and crashes through the Hagan Hamilton Insurance building. How did the driver and passenger walk away unhurt?
Advertisement

You've seen the Subaru commercials with the wrecked cars and people surviving. Here's a real life story of a driver and passenger of a 2015 Subaru WRX performance car who are lucky to be alive. McMinnville, Oregon police found a 2015 Subaru WRX and its two occupants crashed through the front of the Hagan Hamilton Insurance building at 448 S.E. Baker St. last week. Amazingly, the driver, 23-year-old Alberto Garcia of McMinnville, OR and his passenger were not hurt.

According to the story in The Oregonian, Capt. Tim Symons said the 2015 Subaru WRX was traveling at a high speed along Southeast Baker Street when it failed to negotiate a bend in the road late Monday, February 23. The vehicle went through concrete barriers installed to protect Hagan Hamilton Insurance at 448 S.E.Baker St. before crashing through the front of the building. The Oregonian said, Garcia was charged with criminal mischief, drunken driving, reckless driving and reckless endangering.

Driver and passenger not hurt

From the looks of the picture from the accident scene, the front end of the 2015 Subaru WRX was completely destroyed. The driver and passenger were not hurt which is the interesting part of this story. There’s a reason the occupants of this crashed WRX were not hurt. Subaru WRX received the Top Safety Pick award from the Insurance Institute for Highway Safety (IIHS) for good performance in each of the Institute’s crashworthiness evaluations.

For the 2015 model WRX and WRX STI, Subaru added a drivers side knee airbag, bringing the total to seven airbags that come standard on the performance sedans. There’s a second level of protection in WRX that features a Ring-shaped reinforcement frame that surrounds the driver and passengers. This frame is extremely strong for maximum protection against impact energy and diverts it away from occupants. WRX/STI also comes standard with front, front-side and side-curtain airbags.

We’ve written much about the safety systems on the 2015 Subaru WRX that give performance fans peace of mind while they are driving the new performance cars. 23-year-old Alberto Garcia and his passenger found out just how safe these performance cars really are.

Parks McCants wrote on March 3, 2015 - 2:13pm Permalink
Pretty amazing crash protection. However, this bone head is looking at some serious related expense and most likely jail time thanks to a few too many drinks and? Interesting read; thanks.
Katie Bowdle wrote on June 21, 2020 - 1:31am Permalink
Crazy enough the passenger was my then 18 year old son.....we were as shocked as anyone that he had no injuries....we definitely feel like he was lucky to survive this crash!