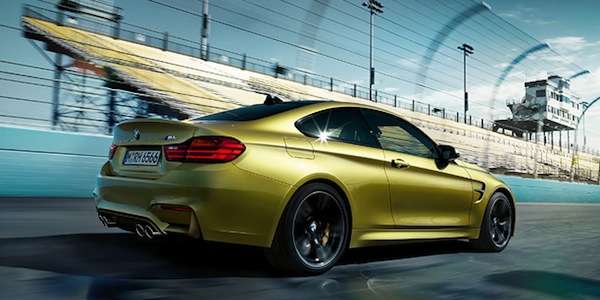 BMW will feature a unique pace car for the CTSCC season opener. This year the new BMW M4 Coupe.
Advertisement

A specially equipped 2015 BMW M4 Coupe will set the pace for the season-opening IMSA Continental Tire SportsCar Challenge race. BMW of North America announced a multi-year partnership with Daytona International Speedway to serve as the title sponsor. In 2015, the race which is officially titled the BMW Performance 200, will run on Friday, January 23, as part of the Rolex 24 At Daytona Weekend.

This will be the fourth-straight year BMW has served as the title sponsor for the CTSCC season-opener. As with previous years, BMW will feature a unique pace car for the event; this year the new BMW M4 Coupe equipped with M Performance Parts will set the pace for the field. Last year, BMW teams started off the season in a winning way with a 1-2-3-4 BMW M3 finish in the Grand Sport class and a 1-2 BMW 328i finish in the Street Tuner class.

The BMW of North America-supported BMW Team RLL will race its two new BMW Z4 GTLM chassis in the legendary Rolex 24 At Daytona on Saturday, January 24, 2015. This follows the numerous privateer-owned BMW cars that compete in the BMW Performance 200 the previous day.

Z4s will have legendary numbers

BMW of North America is celebrating its 40th anniversary in 2015 and this year's Rolex 24 At Daytona also marks the 40th anniversary of BMW Motorsport's first race in the United States. BMW Team RLL will run numbers 24 and 25 in honor of the iconic BMW 3.0 CSL IMSA Group 4 race cars that won the 12 Hours of Sebring in 1975 and the Rolex 24 in 1976.

To get tickets to see the 2015 BMW M4 pace car and numerous BMW race cars at the BMW Performance 200, they can be purchased online at Daytonainternationalspeedway.com or call 1-800-PITSHOP.

Tesla Contemplates A New Strategy for China Retail even As Sales Boom
Jay Leno on Elon Musk & EVs: “I Think He Should Get ... Credit"
END_OF_DOCUMENT_TOKEN_TO_BE_REPLACED