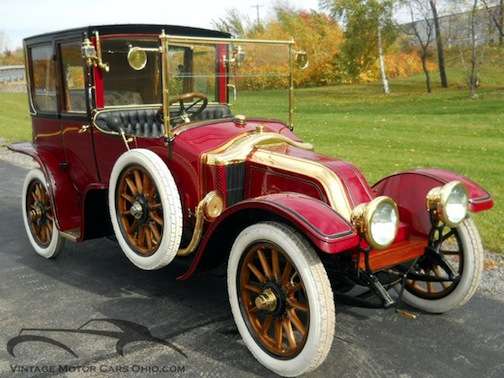 Salvagers still looking for car that sank with the Titanic

Everyone who saw the movie “Titanic” remembers the steamy car scene with Jack and Rose, played by Leonardo DiCaprio and Kate Winslet. The young lovers consummate their burgeoning love affair in the back seat of a car they find while running through the Titanic’s cargo hold. Although that scene made for a great story, it’s highly unlikely anything like that actually occurred.

But the car in the scene from the movie actually was on board the Titanic when it sank in the North Atlantic Ocean that fateful night in 1912. Since 1985 when Robert Ballard discovered the wreckage of the RMS Titanic, salvagers have taken their submarines to the site and have retrieved hundreds of artifacts from the ocean floor. Retrieved items are being sold at auctions and bringing $25,000 to $35,000 dollars for items like a dinner menu.

Salvagers would love to find the 1912 Renault Type CB Coupe de Ville that went down with the ship. Historians say it is the only automobile known for certain to have been on the Titanic and was being shipped in a crate held in a cargo hold located in the forward section of the ship. That part of the ship is resting relatively intact on the seafloor and could be still intact. It’s anyone’s guess if the car is still salvageable and what 100 years worth of seawater has done to the Coupe de Ville.

The 1912 Renault Type CB Coupe de Ville that was on the Titanic, was purchased by William Carter of Bryn Mawr, Pennsylvania, in Europe who was travelling with it and his family. Historians know the car was on the ship by a documented entry on the ship’s cargo manifesto. Carter and his wife and two children amazingly survived the disaster and made a $5,000 claim with the Lloyd’s of London insurance company.

While we have no idea what the Renault would be worth if it is every recovered, we do know in 2003 a near twin of the Renault that was fully restored to the same color and specifications as Carter’s, was sold at an RM Auction for $269,500. The original 1912 Renault Type CB Coupe de Ville was quite an automobile with a 143 inch wheelbase and powered by a 2,614 cc L-head four-cylinder engine that is rated at 12 French horsepower and is mated to a four-speed manual transmission. Today’s equivalent would probably be closer to 40 or 50 horsepower.

If salvagers someday find the original car that sank with the Titanic, and it’s somehow still intact and able to be restored, the car would no doubt bring millions of dollars at auction.

Daniel Watkins ... wrote on May 4, 2017 - 4:30pm Permalink
I wonder what is still in the cargo hold of the titanic... Too bad they scrapped the Olympia. It got upgrades to have water tight doors all the way up to B deck, a double hull... But they decided to scrap it to make work for the great depression..
Ian Percy wrote on July 24, 2017 - 7:53am Permalink
I wonder if the Britanic could ever be brought back up to the surface instead of the few skilled divers who are the only peopel who can reach and touch her now? It would make a fantastic memorial as to what life was like back at the turn of the century.
Denis Flierl wrote on July 24, 2017 - 9:41am Permalink
It would be an incredible way to go back to that era Ian. Thanks for reading!
Anna wrote on February 17, 2020 - 8:55am Permalink
I lost my heel tap shoes went the titanic sank