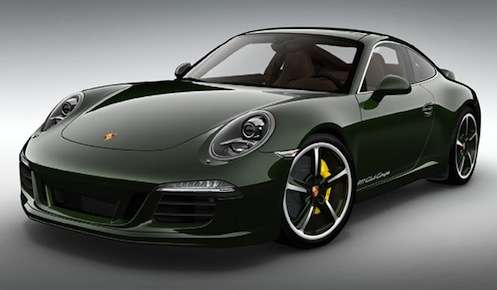 Porsche has created a very special 911 Club Coupe to celebrate the 60th anniversary of the first Porsche club that was founded by seven enthusiasts in Westphalia, Germany in 1952. The club is now known as the Porsche Club Westfalen e. V. A second club was started by another six gentlemen a few months later called the Porsche Club Berlin. Today the two organizations have grown into 181,000 members among 640 Porsche Clubs in 75 countries.

To honor those thirteen founding Porsche Club members, the German automaker has created the 60th anniversary 911 Club Coupe. The car will also be built to honor all the Porsche Club members worldwide. Porsche Community Management has teamed up with Porsche Exclusive to create a very special and rare vehicle. Because the car is honoring those first club members, only thirteen 911 Club Coupe’s will be built. 12 Club members will have the opportunity to own one the special-edition coupes and they can only be acquired through a lottery. Porsche says the last vehicle will remain at Porsche headquarters to honor the Porsche Clubs worldwide.

Porsche has just released full details of the special car. The design of the 911 Club Coupe will be based on the 911 Carrera S Coupe and will feature a “Brewster Green” exterior color with a special “911 Club Coupe” lettering on the bottom of the doors and rear bumper. The car will also sport distinctive front and rear spoilers.

Underneath the beautiful exterior, the 911 Club Coupe is powered by a Carrera S boxer engine with gasoline direct injection pumping out an upgraded 430 hp (+30 hp compared to the 911 Carrera S). The engine also gets modified cylinder heads and camshafts, a newly developed variable resonance-type intake system, and a sports exhaust system with two dual tailpipes.

Porsche says the 911 Club Coupe will sprint from 0-100 kph in just 4.0 seconds.
The suspension also gets tweaked with a PASM sports suspension that is lowered an additional 20 mm and is shod with 20-inch Sport Techno wheels with performance tires at all four corners.

The interior also gets special treatment with natural leather on the sport seats with decorative stitching. Developed specifically for the 911 Club Coupe, the switch panel trim strip is fitted with a personalized laser engraving "911 Club Coupe – personally built for" and the name of the owner. The anniversary logo "60 Years of Porsche Clubs" is placed on the door entry sill plates.

If you want one of these very rare cars, you have until June 16 to get your name registered. The cost of one of the 911 Club Coupe’s? $175,580. It sure would make a nice 60th birthday present for someone.