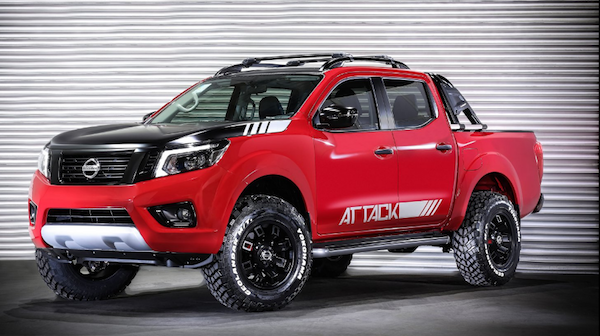 The new-generation Nissan Frontier pickup could be getting closer to production. Nissan unveiled a new Frontier pickup concept for truck fans, but they did it in South America at the Buenos Aires Auto Show. The Frontier Attack Concept is the latest creation form the Nissan Design Center in Rio de Janeiro and it could be a preview of things to come.

Nissan is tight-lipped when it comes to talking about the Frontier Attack Concept making it to production, but the Japanese automaker has been working on the new-generation Frontier mid-size pickup and this could be a forerunner.

The Frontier concept truck was inspired by “extreme and imposing monster-trucks,” setting the basis for a potential production version of the vehicle in the future. That’s good news for Frontier fans who have been waiting for the new-generation model.

Nissan says, the new version is 40 mm higher than the current production model, and its roof and tires are considerably larger, leading its designers to name it "the beast.” The Frontier Attack show model will be the ideal vehicle for off-road adventures. It also comes with Hill Start Assist, Hill Descent Control and Vehicle Dynamic Control System which electronically controls the vehicle's traction and prevents it from skidding, overturning, or losing control.

The Frontier Concept show model comes powered by a 2.3-liter diesel engine that produces 190 PS (187 hp / 139 kW) and 450 Nm (331 lb-ft) of torque. It comes mated to a six-speed manual gearbox sending the diesel power to its four-wheel drive system.

It also gets a skid plate, roll bar, massive Yokohama off-road tires, tinted headlights, side steps, and a luggage rack. Will the new Nissan Frontier Attack Concept make it to production? Stay tuned.