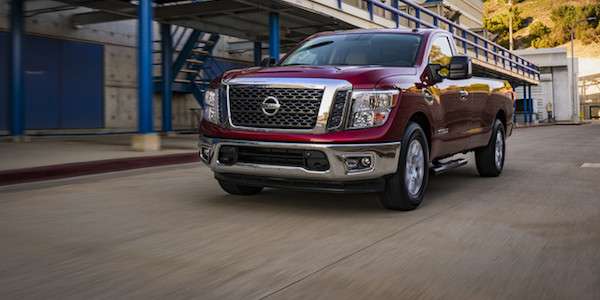 The first-ever Titan Single Cab has been announced by Nissan for commercial truck buyers. The new truck will be available in two entry grade levels and choice of 4x2 and 4x4 drive. Nissan’s new Single Cab trucks are designed to provide an affordable and rugged entry-point in the commercial fleet/work truck market.

The newest Titan will have about a foot shorter wheelbase than Titan XD and will be powered by the new 5.6-liter Endurance V8. Nissan will be offering a new V6 engine in the Single Cab models at a later date. Two engine choices will be available when the truck launches this fall; The Cummins 5.0-liter V8 Turbo Diesel, which is rated at 310 horsepower and 555 lb-ft of torque; and the 5.6-liter Endurance V8, rated at 390 horsepower and 394 lb-ft of torque.

Two grade levels will be initially be available with both Titan XD and Titan Single Cabs. The S and SV, along with a number of optional equipment packages, are scheduled to go on sale in late fall 2016. The new 2017 Nissan Titan takes the truck into new territory making it a wider base use for commercial buyers. Stay tuned for pricing.