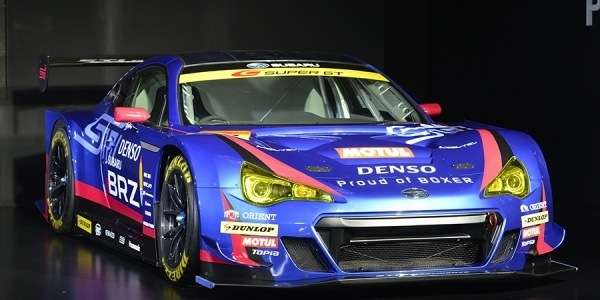 The new 2015 Subaru BRZ GT300 race car is unveiled at the Tokyo Auto Salon 2015. It gets one critical change.
Advertisement

As in other team sports, the start of a new race season brings hope for better things and a winning season. Fuji Heavy Industries Ltd. (FHI) and Subaru Tecnica International Inc. (STI) announced they will again participate in the Super GT series with the BRZ GT300 race car. The new 2015 Subaru BRZ GT300 race car has been unveiled at the Tokyo Auto Salon 2015 for race fans to see.

FHI and STI presented their outline of Subaru Motorsport activities for 2015 at the Tokyo Auto Salon 2015 with NAPAC (Japan Car Parts and Aftermarket Promotion Association). The Super GT series is widely regarded as Japan's top motorsports category and there is stiff competition from the Nissan GT-R, Honda CR-Z GT, BMW Z4, Mercedes-Benz and Lamborghini GT3. Last season Subaru finished in 6th place and knows they can get better.

The race car employs the same front-engine, rear-wheel-drive layout as the 2015 BRZ production model. With its Subaru boxer engine layout that sits low in the chassis, the car employs a very low center of gravity and the weight is balanced between the front, rear, left and right. This makes for an ideal setup for the road or track.

Throughout the 2014 race season, the 2014 Subaru BRZ GT300 was fast, qualified in the pole position and won a race. All the drivers seemed to struggle with the Michelin tires the past two seasons getting the proper traction especially with the temperature changes. Tires play a critical role in the performance of the race car, and the team struggled to keep traction on the cool tracks. STI says they will switch to Dunlop tires that the 2015 WRX STI uses for the Nurburgring 24-Hour Race. The team hopes the new Dunlop meats employed on this years BRZ GT300 race car will make a big difference.

The manager will be Hideharu Tatsumi, and they will be operated in conjunction with R&D Sport led by Director Shinji Motojima, and Takuto Iguchi. Also, a new driver, Hideki Yamauchi will be driving for the team. The new 2015 Subaru BRZ GT300 race car has been unveiled for race fans to see and the team is ready and excited for the 2015 Super GT race season. Stay tuned as they get on the test track and dial in the new tires and other changes on the 2015 BRZ GT300.