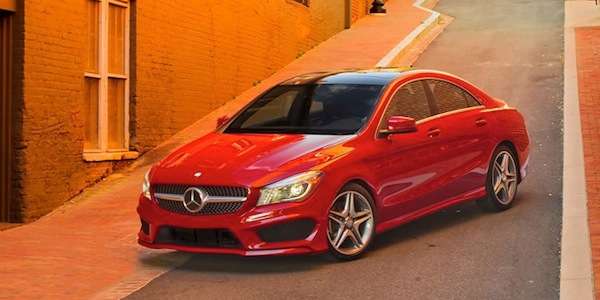 A new feature will begin arriving soon on the 2014 Mercedes-Benz CLA-Class that will move it forward even faster than before.
Advertisement

The new 2014 Mercedes-Benz CLA-Class has been in the U.S. since last September, but a new feature is coming soon for the first time. The CLA is already a big success around the globe, but it gets better with the arrival of the all-wheel-drive option 4MATIC.

The CLA250 arrived last year with its concept car styling and now is starting to show up in showrooms with the new-generation Mercedes 4MATIC all-wheel drive system. Before now, the CLA was only available with front-wheel-drive configuration, but buyers will be able to get it with 4MATIC soon. All-season traction will make the CLA even better than before.

The Mercedes CLA 4MATIC is a $2000 option and is worth every penny especially if you live in cold climates. The CLA 4MATIC all-wheel drive was specifically designed for the four-door coupe and will give the driver confidence in any situation. The system doesn’t add much weight and features variable torque to all four wheels.

4MATIC continually monitors for wheel slip, and can instantly send up to 50 percent of the engine's torque output to the rear wheels in response to changing driving conditions. The 4-wheel Electronic Traction System (4-ETS) monitors for the first sign of wheel slip and responds accordingly and sends grip to the wheels that need it, even if that's only one wheel.

The CLA250 has an MSRP starting at $29,900 plus $925 destination. It comes standard with HD Radio, Hands-free Bluetooth interface, sport front seats, 14-way front seats with memory, Split-folding rear seats and ambient interior lighting. The 2014 Mercedes-Benz CLA250 will soon be available with the all-season traction of the advanced 4MATIC all-wheel drive system. The CLA250 4MATIC is just beginning to arrive at some U.S. dealerships.

Other 2014 Mercedes-Benz CLA250 stories of interest.